An Essay on Naval Discipline 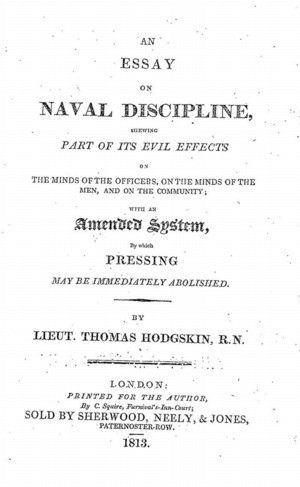 Hosgskin began his interesting career as a radical individualist and natural rights defender of the free market with this pamphlet criticising the British naval policy of impressing (i.e. conscripting) sailors into the navy and using corporal punishment to discipline them. He based this account on his own personal experiences while serving the British Navy during the Napoleonic Wars.

An Essay on Naval Discipline, Shewing Part of its evil Effects on the Minds of the Officers, on the Minds of the Men, and on the Community; with an Amended System, by which Pressing may be immediately abolished, by Lieut. Thomas Hodgskin, R.N. (London: Printed for the Author, by C. Squire, Furnival’s-Inn-Court, sold by Sherwood, Neely & Jones, Paternoster-Row 1813).