History of the Conquest of England by the Normans vol. 1 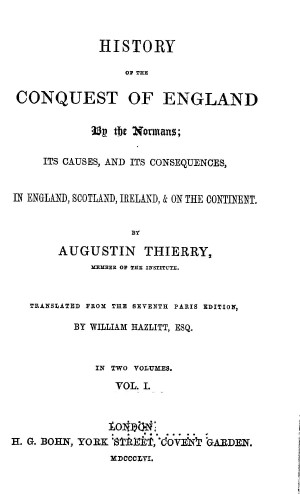 Volume 1 of a 2 volume work. Thierry was a pioneering liberal historian who collected large bodies of primary source material to use in his writings. He is particular remembered for his class analysis based upon the idea of conquest. This work is a classic exposition of this thesis showing the conquest of the Anglo-Saxons by the French Normans.

History of the Conquest of England by the Normans; Its Causes, and its Consequences, in England, Scotland, Ireland, & on the Continent, translated from the seventh Paris edition, by William Hazlitt (London: H.G. Bohn, 1856). In 2 volumes. Vol. 1.