The Debates in the Several State Conventions vol. 1 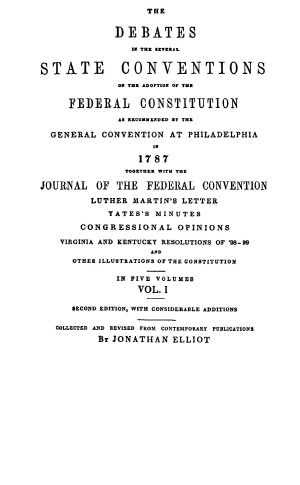 Vol. 1 of an influential early 19th century edition of key documents about the ratification of the US Constitution by the states.

The debates in the several state conventions on the adoption of the federal Constitution, as recommended by the general convention at Philadelphia, in 1787. Together with the Journal of the federal convention, Luther Martin’s letter, Yates’s minutes, Congressional opinions, Virginia and Kentucky resolutions of ‘98-‘99, and other illustrations of the Constitution … 2d ed., with considerable additions. Collected and rev. from contemporary publications, by Jonathan Elliot. Pub. under the sanction of Congress. (1836), 5 vols.