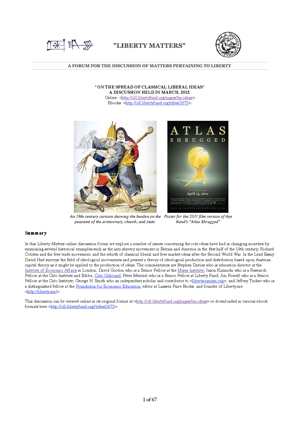 Liberty Matters: On the Spread of Classical Liberal Ideas (March, 2015)

This online discussion is part of the series “Liberty Matters: A Forum for the Discussion of Matters pertaining to Liberty.” In this discussion David Hart surveys the field of ideological movements and present a theory of ideological production and distribution based upon Austrian capital theory as it might be applied to the production of ideas. The commentators are Stephen Davies, education director at the Institute of Economic Affairs in London; David Gordon, Senior Fellow at the Mises Institute; Jason Kuznicki, Research Fellow at the Cato Institute and Editor, Cato Unbound; Peter Mentzel, a Senior Fellow at Liberty Fund; Jim Powell, Senior Fellow at the Cato Institute; George H. Smith, an independent scholar and contributor to <libertarianism.org>; and Jeffrey Tucker, distinguished fellow at the Foundation for Economic Education.</libertarianism.org>