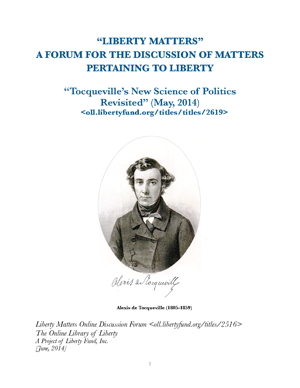 Aurelian Craiutu argues that Tocqueville was not just an observer of democracy in America but also a theorist of democracy who wanted to create “a new science of politics” suitable to the new world which was beginning to take shape at that time. Craiutu points out four dimensions of Tocqueville’s new science of politics that might help us better understand his thinking. The first is that Tocqueville’s new science of politics is fundamentally cross-disciplinary, at the intersection of political science, sociology, anthropology, history, and philosophy. He then goes on to discuss the other dimensions such as its comparative, normative, and political dimensions. He concludes that his works must therefore be seen as belonging to a larger French tradition of political engagement and political rhetoric in which the writer enters into a subtle and complex pedagogical relationship with his audience, seeking to convince and inspire his readers to political action. This thesis is discussed by Daniel J. Mahoney of Assumption College, Filippo Sabetti of McGill University, and Jeremy R. Jennings of King’s College London.