Home / Titles / The Distribution of Wealth: A Theory of Wages, Interest and Profits

The Distribution of Wealth: A Theory of Wages, Interest and Profits 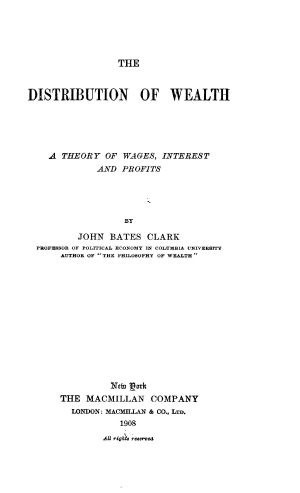 This 1908 edition is the third reprinting of Clark’s path-breaking, yet widely under-read, 1899 textbook, in which he developed marginal productivity theory and used it to explore the way income is distributed between wages, interest, and rents in a market economy. In this book Clark made the theory of marginal productivity clear enough that we take it for granted today. Yet, even today, the power of his methodical development of what seems obvious at first glance clarifies and demolishes inaccurate theories that linger on. His work remains illuminating because of its classic explanations of the mobility of capital via its recreation while it wears out, the difference between static and dynamic models, the equivalence of rent and interest, the inability of entrepreneurs to "exploit" (meaning, underpay) labor (or capital) in a competitive market economy, the flaws of widely-quoted existing theories such as the labor theory of value and the irrelevance of rent on land, and, in a famous footnote, why von Thünen’s concept of final productivity didn’t go far enough.

The Distribution of Wealth: A Theory of Wages, Interest and Profits (New York: Macmillan, 1908).