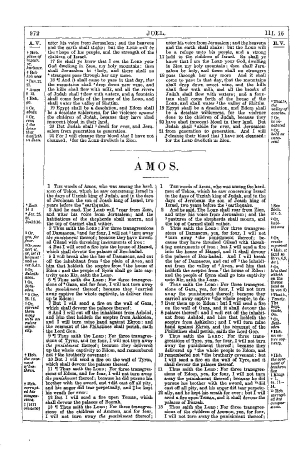 Amos was among the earliest of the Hebrew prophets to have a biblical book named after him. he taught that God’s justice extends to all men regardless of their nationality and that all men are expected to pursue justice. Because Israel and Judah were increasingly falling under the influence of evil ways, Amos predicted the destruction of the two kingdoms by plague and locusts. The destruction did indeed take place, though it was not by plague or locusts but by the conquering armies of the Assyrian Empire.

The Parallel Bible. The Holy Bible containing the Old and New Testaments translated out of the Original Tongues: being the Authorised Version arranged in parallel columns with the Revised Version (Oxford University Press, 1885). Amos.