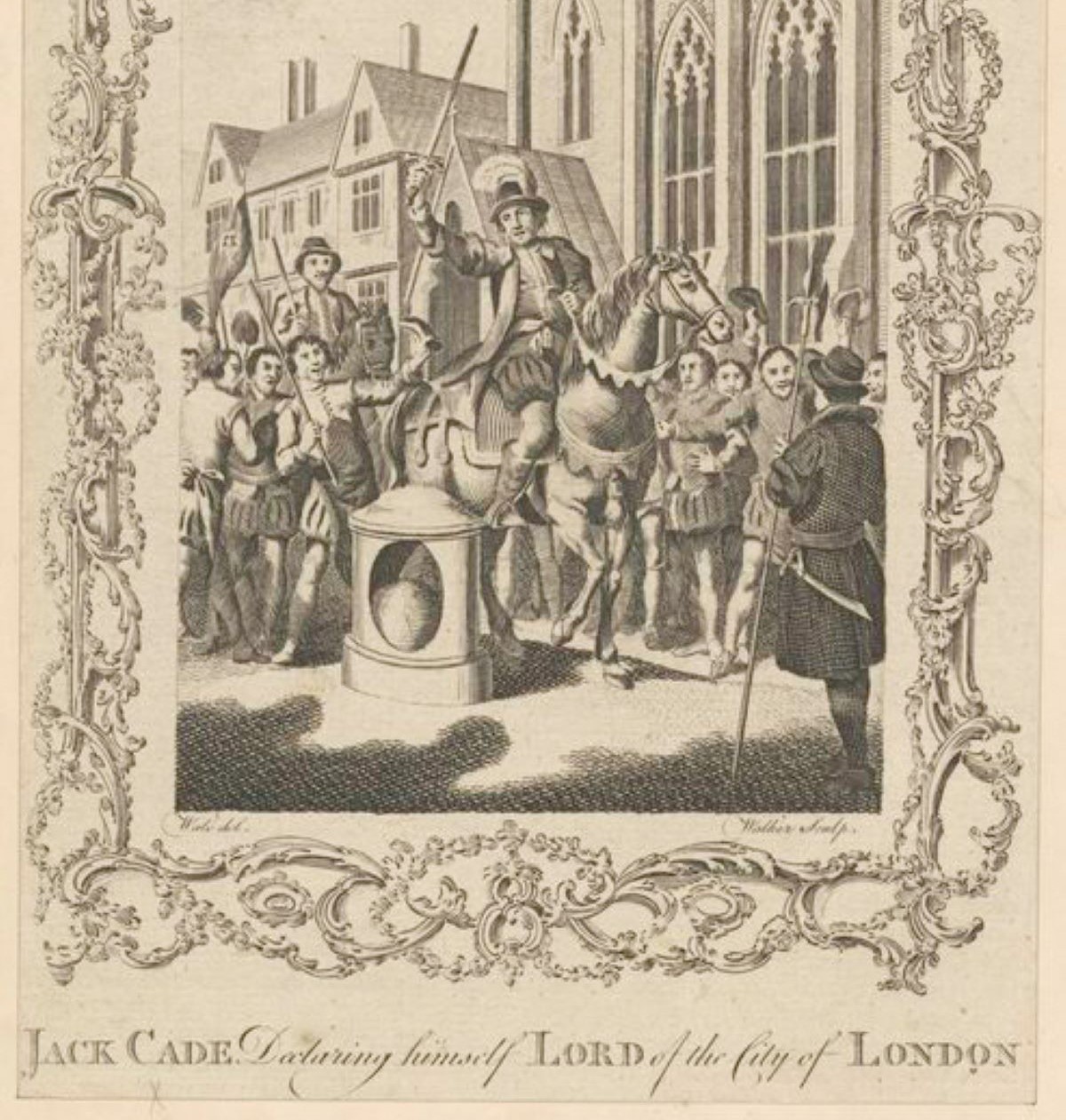 On the first anniversary of the Capitol riots, I find myself reflecting on Shakespeare’s various depictions of popular insurrections. He devoted a full act of his first history play, which we know as Henry the Sixth, Part 2, to Jack Cade’s 1450 revolt. Turning later to Roman history, he depicted similar insurrections in both Julius Caesar and Coriolanus.  Between writing those two tragedies, he also seems to have contributed a scene to a revised staging of a multi-authored play on Thomas More, the only surviving theatrical manuscript believed to be in Shakespeare’s own hand. In it, More confronts and disperses a popular insurrection—as it happens an anti-immigration riot.

While one could object that these historical insurrections were much more significant than the Capitol riots, what connects them in my mind is their apparent ridiculousness. Jack Cade is a particularly apt example. He makes his first appearance in Henry the Sixth, Part 2 accompanied by Dick the Butcher and Smith the Weaver, whose punning asides undermine his claims to legitimacy and virtue. His father came from the royal family of Mortimer— he was a bricklayer (or mortarer)—and his wife is an (aristocratic) Lacy—a peddler who sold many laces. He himself is valiant—in his begging—and able to endure much—in his frequent public whippings.
Cade’s most memorable promise (first proposed by Dick the Butcher) is “the first thing we do let’s kill all the lawyers.” It is a joke that still lands well—I own a T-shirt from the Oregon Shakespeare festival featuring this quote. At the outset, Cade is presented as a ridiculous and unconvincing rebel, a source of humor as much as a threat.

Yet as the play continues, it becomes clear that ridiculousness does not preclude very real consequences. As Cade invades London, sets fire to London Bridge, and forces the King to flee north to Kenilworth Castle, his humor takes on a different tone. Though less quoted than the lawyer joke, Cade’s proclamation, shortly before his execution of the Lord High Treasurer, to “Burn all the records of the realm. My mouth shall be the Parliament of England” clarifies the logic implicit in the earlier line. It is still a joke, but one with a sting in its tail: not just conniving lawyers, but the rule of law itself is at stake.
Cade’s execution of a clerk because he can sign his own name (unlike Cade and his illiterate followers), also demonstrates the impact of insurrections on innocent bystanders. Though Shakespeare does not emphasize it, the executed treasurer was closely associated with several policies universally criticized in the play. While this by no means justifies his execution, it does make it understandable as an act of terrorism. The anonymous clerk, by comparison, invites the audience’s identification as an innocent victim.
The same loss of innocent life occurs in Julius Caesar, where a mob seeking the conspirators who have assassinated Caesar murder Cinna the poet because a conspirator has the same name. However amusing the incompetence of Shakespeare’s rioters may initially seem, the consequences inevitably harm the innocent.
Shakespeare also demonstrates a recurring interest in the relationship of popular insurrections to the political machinations of elites. Both 2 Henry VI and Julius Caesar are plays about civil war, while Coriolanus recounts a great general’s treasonous betrayal of Republican Rome. In each of these plays, the insurrections are presented as directly connected to the tragic scheming of political elites, though in different ways.


The case of Jack Cade is the most straight-forward. Well before we meet Cade himself, the scheming Duke of York tells us in a soliloquy that he has “seduced a headstrong Kentishman / John Cade of Ashford, / To make a commotion as full well he can” by pretending to be the rightful heir to the English throne. Cade’s rebellion, then, is explicitly stirred up by York to further his own plan to become King. Though Cade is largely left to his own devices as regards the specific nature of the commotion—when an opponent claims that the Duke of York has taught Cade his story, Cade tells the audience “he lies, for I invented it myself”—there is no doubt that Cade is, in fact, a conscious agent of York’s larger schemes.
In Julius Caesar, by comparison, the revolting plebeians are unconscious agents manipulated by populist discourse. Driven into the streets at the start of the play to “make holiday to see Caesar, and to rejoice in his triumph,” they are later stirred by Marc Antony’s famous funeral speech into open insurrection (here delivered by Marlon Brando, from Joseph Mankiewicz’s 1953 film).

The resulting insurrection provides cover for Antony and his allies’ coup, as they are shown drawing up a hit list of Republican sympathizers in the following scene.
Coriolanus offers the most complicated picture of all. Here, the plebeians’ rioting leads to the granting of elected tribunes to represent their interests. These tribunes are presented as petty and self-absorbed, and their scheming undoubtedly stirs plebian discontent into an unjust and unpatriotic rejection of the war hero, Coriolanus. Employing anachronistic labels for simplicity’s sake, they offer a picture of left populism in contrast to the right populism of Marc Antony and Caesar.
But while Shakespeare invites scorn upon the tribunes, it is equally clear that Coriolanus’s aristocratic pride creates their opportunity. More specifically, Coriolanus’s refusal to restrain his pride in accordance with the norms and traditions of Roman political culture invites the plebeians’ anger and resentment, and even his staunchest and most aristocratic supporters criticize this refusal.
Given this open disdain for plebeians, the tribunes may actually be fulfilling their roles as representatives in goading the plebeians into rejecting Coriolanus. But Shakespeare also makes clear that they have failed to act in the best interests of the Roman Republic as a whole. In spurning the war hero, they have helped to create a powerful enemy for the city; and it seems unlikely that his treasonous siege of Rome is a boon to the plebeians or any other Romans.
What lessons to draw from these reflections on popular insurrections, I leave to the reader. That Shakespeare was able to appreciate both the ridiculousness and the seriousness of such events, and that he was inclined to link them to the machinations of political elites, both seem clear enough. I suspect that Shakespeare’s depictions of popular insurrections will continue to fascinate readers long after the events of last January 6th have faded to a dull and dimly-remembered bit of history.