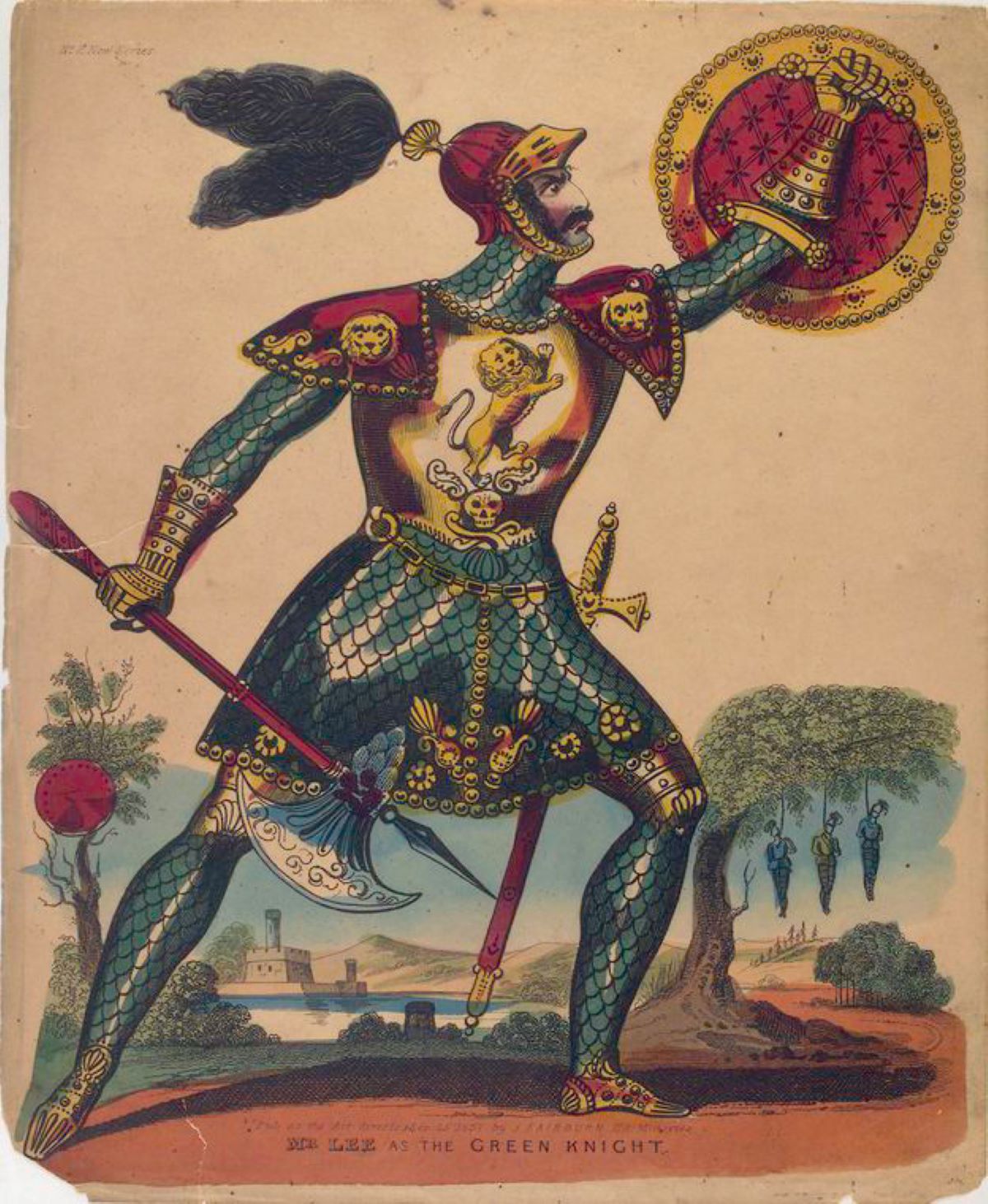 David Lowery’s film adaptation of the 14th Century alliterative romance, Sir Gawain and the Green Knight, is a thoughtful and provocative response to its source, at once more faithful and more innovative than previous film versions.

In adopting an anti-naturalist, symbolic method of story-telling, Lowery strongly evokes the allegorical medieval ethos of the original. Yet his film is also quite consciously a product of our own contemporary moment, and exploring the relationship of this modern re-telling to its medieval inspiration offers a fruitful path into this rewarding but dense film.
The original poem exemplifies Dutch historian Johan Huizinga’s vision of the late medieval world as one of ludic idealism in its embrace of chivalric honor, courtly love, and hermetic piety. It is a world made meaningful by mirthful games and contests, governed by strict rules of courtesy, and fully integrated into a cyclical calendar of Christian holidays and sacred observances. Indeed, the unexpected but miraculous—or in the language of the poem, the “mervaylous”—sacrifice of Christ is a model for this idealistic but joyously merry spirit of play.
Such play is not without consequences, nor does it erase the pragmatic and materialist impulses that are as much a part of the medieval world as they are the modern. In fact, the poem is closely (if quietly) attentive to ways in which chivalric honor and courtly love can serve as masks for impure and darker material motives. But these individual and collective failings, evidence of a fallen nature, spark a call to remember those true Christian ideals rather than to reject them as the false ideology of a corrupt elite.
Lowery’s film certainly takes up the original poem’s interest in both the marvelous and in games with consequences not initially apparent. But there is very little mirth in his film; even its games are marvelous in their foreboding rather than in merriment. Courtesy appears only as a veneer for less lofty, ulterior motives rather than as a legitimate code of conduct. Lowery’s medieval world is closer to that of Beowulf—or more aptly, for modern audiences, to Game of Thrones—than to the original Sir Gawain and the Green Knight.
In addition to recasting Camelot as Heorot or the Red Keep, Gawain’s encounters on his journey to find the Green Knight emphasize the material inequities of that medieval world, notwithstanding their dream-like presentation. Gawain encounters class warfare, robbed by a group of commoners who notably destroy his shield (readers of the poem will remember it as the allegorized symbol of his 5 sets of 5 Medieval Christian virtues); and the aftermath of sexual violence enabled by patriarchal authority.
For that matter, Lowery’s Gawain is a very different figure than the poem’s embodiment of courtesy. Though still related to Arthur, he is positioned on the edge of court, not yet a knight and implicitly balanced between that grim-but-elite world and an equally grim world of brothels and taverns, where he engages in drunken excess that lacks both the mirth and the Christian sanction of the poem’s similarly-inebriated festivities. He also has a hooker-with-a-heart-of-gold girlfriend who significantly impacts the meaning of both the important castle sequence and Gawain’s final encounter at the Green Chapel. He is a young man struggling with what admission to elite culture might mean, and how that patriarchal culture impacts society as a whole.
Conservative and libertarian viewers would do well, in my view, to take seriously Lowery’s reimagining of Sir Gawain and the Green Knight rather than to dismiss it as a product of “woke” culture. Huizinga identified the ludic idealism of the late medieval period as a response to the brutally harsh material realities of that world, and in widening our view to take in more of those realities, Lowery reminds us that just as with games, dreams and ideals can also have unintended consequences.
At the same time, it is worth noting that the original poem seems to offer a more forgiving measure of its hero—and by extension, of its audience. The original Gawain can remain a hero despite his ultimate failure to fully embody his Christian ideals. Whether Lowery’s Gawain is allowed the same grace in his final encounter with the Green Knight is highly doubtful, and raises questions about the role of forgiveness in combating systemic injustices.
I saw this movie at a 10:00 PM mid-week screening. As I entered the restroom afterwards, I ran into my friend Forest—his real, non-allegorical name—whom I hadn’t seen in the theater. I know Forest through a pick-up soccer game I organize, and from the kitchen of a fantastic organic pizza place that didn’t make it through the pandemic. Like a lot of the folks in that kitchen, he also plays in a band; and since the restaurant closed, he is running Forest Services LLC Tree Removal and Prune. “Dude,” he asked, in response to the movie, “what the f*ck?” 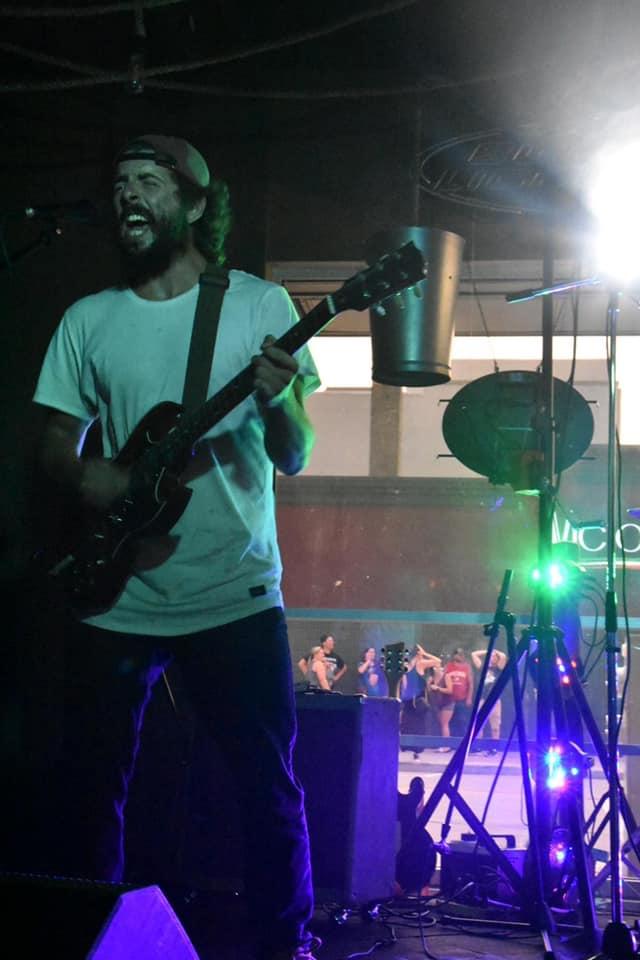 A few minutes later, as I was leaving the theater itself, I saw Forest hanging outside the building with a friend. He motioned me over, asking, “Have you got a sec?” His first question was about the role of Gawain’s mother in the film, and I had to confess that, as she was not in the original poem, his guess was as good as mine. Then I started talking about the poem, especially its clearer links between the game of the castle sequence and the conclusion of Sir Gawain’s game with the Green Knight.
Two other strangers, young men who had exited behind me, gathered alongside Forest and his friend as I talked. At half past midnight on a Thursday evening, as the tenured economist and professional cinematographer who had accompanied me waited patiently, a group of mostly strangers voluntarily gathered in a parking lot for a 15-minute class on a 650-year-old, Middle English poem. Perhaps there is still a little room for courtesy and mirth, even in this fallen modern world of ours.