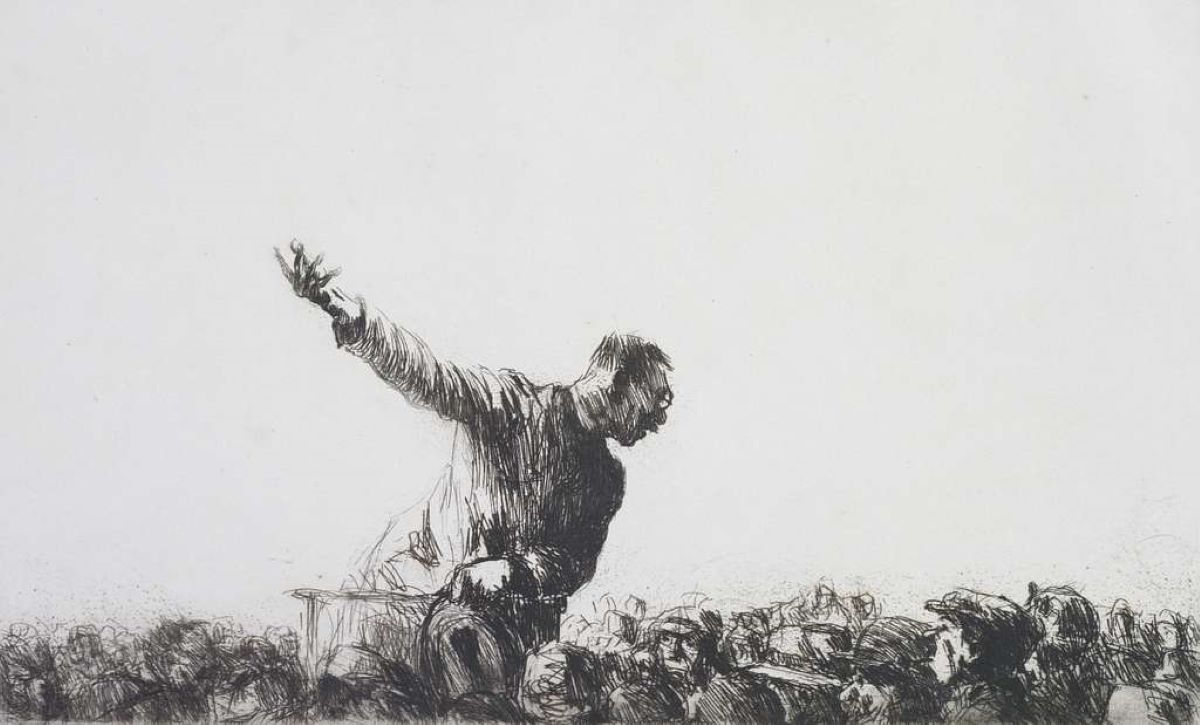 If you tell people you’re working on some project involving free speech, odds are good they will reply with something about how timely that is, since, regardless of whether they identify as liberal or conservative, they likely think that free speech is under attack. And either way, they’re correct. Your project is timely. But one thing we learn from Jacob Mchangama’s new book is that it is always timely. In this majestic work, Mchangama demonstrates that free speech has always, even in the best of times, been hanging by a thread.

The book is exactly what the subtitle promises: a comprehensive history of the idea and the practice of free speech from ancient times up to today. It is a truly impressive survey of politics, history, law, and philosophy that reveals extensive and rigorously-sourced research, but which is also written in clear, conversational prose. It’s perhaps a problem for scholarship that I felt obliged to use a contrastive “but” in the previous sentence, but books that deploy this level of historical and legal research are often plagued by less-than-captivating prose. Mchangama’s prose is engaging and illuminative, so one learns a tremendous amount while always maintaining the narrative.


Free speech is one of the central features of liberalism. The very idea that people might have different ideas and viewpoints is a corollary of the human pluralism that makes liberalism necessary, and the ability to express differing opinions and values is a necessary condition of a liberal society. Free speech is crucial to the advancement of science as well as to moral and social progress. Free speech is what makes a vibrant artistic and cultural life for a society possible. Free speech is necessary for avoiding dogmatism and orthodoxy in higher education and scholarship.


If free speech is so wonderful, why then is free speech always under attack? The obvious reason, which Mchangama documents thoroughly, is that it typically represents a threat to those in power. More insidiously, even people who do not have any particular power can find it threatening, or at least discomforting, to be confronted with ideas and values different from their own, and this fear can be exploited by the powerful. So while the philosophical arguments in favor of free speech are very robust, free speech as a social value is frequently undermined. This is one of the central themes in Mchangama’s story. As he progresses from ancient to medieval to Enlightenment to today, example after example show this dynamic at work. The phenomenon is not merely trans-temporal, it’s trans-cultural as well: he covers Europe, the Middle East, Asia, Africa, and the Americas. It’s interesting that just as the liberal proponent of free speech claims that the values are trans-cultural, opposition to free speech is also.


Another recurrent theme is the distinction between free speech as a legal issue and as a cultural issue. Beginning with a discussion of the ancient Athenian distinction between isegoria (equality of public, civic speech) and parrhesia (frank, uninhibited speech) and showing how variants of this distinction crop up in other times and cultures, Mchangama explores the interrelation of the two. “Isegoria was exercised in the Athenian Assembly….Parrhesia allowed the citizens to be bold and honest in expressing their opinions even when outside the assembly and extended to many spheres of Athenian life including philosophy and theater” (p. 13). This meant that diverse views could be aired in specifically political contexts and also in broader life. Without free speech in the former sense, they would not have enjoyed political equality, but without free speech in the latter sense, they would not have enjoyed the robust philosophical inquiry and rich dramatic life for which Athens was known.


Of course, this all seems to have been irrelevant to Socrates, who found himself tried and executed for speech that others found discomforting. If one of the political advantages of free speech is the ability to question one’s own government, then one would think the democratic Athenians would value it, but Socrates’ case shows that even in such a society, free speech is still vulnerable. Socrates’ execution arguably led to an expansion of philosophical activity in Athens, rather than to its curtailment, and Mchangma is surely accurate to describe Socrates as “the first recorded martyr for free speech” (p. 21). He was martyred because, despite the general sense of free speech in Athens as a guardian of their democracy, the same democratic processes can be used to punish free speech. This analysis by Mchangama is insightful: “Safeguarding speech requires checks and balances that are strong enough to temper the fears and passions of a populace such as that which wielded direct political and judicial power in Athens. Once the civic commitment to parrhesia broke down, the fine line between egalitarian democracy and revanchist mob rule was blurred, and those who, like Socrates, offended the deepest convictions of their fellow citizens were at the mercy of popular opinion. This was one of the chief lessons that James Madison and Alexander Hamilton would later draw from Athenian democracy, which they viewed with deep skepticism” (p. 21).


Another recurring theme is what Mchangama calls “Milton’s Curse,” referring to the 17th-century writer John Milton. Milton is best known for the epic poem Paradise Lost, but he was also the author of the prose essay Areopagitica, a philosophical argument in favor of free speech rights, and specifically against pre-publication censorship. Yet Milton was quite intolerant of Catholicism, Mchangama informs us, praising a 1650 ban on blasphemy targeting Catholics, and eventually becoming a censor himself. “’Milton’s Curse’ – the selective and unprincipled defense of free speech – would afflict many other great champions of free speech in the centuries to come, and remains a recurrent theme today” (p. 107). The index to the book has six entries for “Milton’s Curse” – including Ben Franklin - and sure enough it’s sadly very common. Part of what causes this is people’s propensity to exercise power when they can, and part of it has to do with the necessarily vague language that typically attaches to restrictions on speech. Since free speech is relatively more advantageous to those not in power, when those people gain power, it’s not surprising that they would then clamp down on others. This phenomenon can be observed both when the people attaining power are sincere in their belief in their own justice as well as when they seem more cynical, and Mchangama illustrates several of both sorts. Indeed, the more certain you are of the justice of your cause, the more likely you are to be wary of free speech, as it represents that much more of a threat to your cause. Mchangama gives examples ranging from medieval religious authorities to communists to contemporary proponents of campus speech codes.


One challenge commonly facing today’s proponents of free speech is the objection that free speech theory cannot include hate speech. Mchangama discusses the ways American constitutional law has handled this concept, but even more enlightening is his coverage of the history of this putative exception. People familiar only with recent calls to ban hate speech will be interested to see the relatively long history of this concept, which has its roots, perhaps unsurprisingly, in attempts to stifle dissent against theocracy and totalitarianism. Mchangama quotes Eleanor Roosevelt warning us about this in 1950: “any criticism of public or religious authorities might too easily be described as incitement to hatred and consequently prohibited….[hate speech exceptions] would only encourage Governments to punish all criticisms in the name of protection against religious or national hostility” (p. 293). This fits the broader pattern in which proponents of restrictions on speech for what they think are noble purposes often find those restrictions later weaponized against their cause. Mchangama rebuts the currently-fashionable charge that free speech perpetuates unequal power relations by noting that free speech “may well be the most powerful engine of equality ever devised by humankind” (p. 390). (When I say he “notes” this, I am of course referring to the 13 chapters of demonstrations which illustrate the point.)


Mchangama is not only a historian of free speech, he is an advocate as well. He agrees with historical defenders of free speech that it is the “bulwark of liberty” and essential for both political equality and the scholarly pursuit of truth. He ends by noting that “a world with less free speech will also be less tolerant, democratic, enlightened, innovative, free, and fun” (p. 393). But he isn’t speculating: he’s just spent nearly 400 pages showing the correlation between liberal free speech norms and these other attributes which societies have enjoyed more or less of in the last 2500 years. He’s also aware that, and has documented how, free speech is never too secure, admonishing the reader that “it is up to each of us to defend a culture tolerant of heretical ideas, use our system of ‘open vigilance’ to limit the reach of disinformation, agree to disagree without resorting to harassment or hate, and treat free speech as a principle to be upheld universally rather than a prop to be selectively invoked for narrow tribalist point scoring” (p. 392).


Mchangama has done us all a great service with this impressive feat of scholarship, which effectively shows why, historically, all our philosophical defenses of free speech are true. It is a must-read for all those who care about free speech, about liberalism generally.

The review of the book provokes me to read the book. It seems the book is an excellent piece to know the history and politics of free speech since Socrates. In today's age of social media the free speech has the sky as the limit but at the same time free speech is being attacked by its enemies in an organized manner by using false propaganda through social media against it and its proponents are being victimized even in democratic regimes.

As a one time journalist and writer of poetry, this book has a deep meaning for me. We live in very trying times when despotism is rearing its head around the world - Brazil, Hungary, Russia, China,the theocracies of the Islamic world. Half of the world lives under the tyranny Anti free speech and the dangers it portends for those who of us who watch from afar.
I would wish therefore this book be handed out to leaders of these countries for their enlightenment.
Doubt though whether it would make any meaning to them!
Great work of thought worth having in the library shelf.