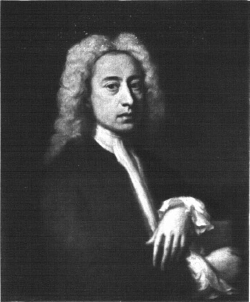 The English poet Alexander Pope (1688-1744) in his “An Essay on Man” (1732) argues that “even kings” are obliged to act increasingly morally because of the operation of the natural laws which govern society and the world:

The same Self-love in all becomes the cause

Of what restrains him, government and laws.

For, what one likes if others like as well,

What serves one will, when many wills rebel?

How shall he keep what, sleeping or awake,

A weaker may surprise, a stronger take?

His safety must his liberty restrain:

All join to guard what each desires to gain.

Forc’d into virtue thus by self-defence,

And found the private in the public good.

The poet Alexander Pope makes one of the first explicit arguments for the idea that the pursuit of selfish interests indirectly promotes the public good in his poem “An Essay on Man.” The law of nature acts as a kind of brake on the selfish desires of individuals, whether kings or commoners, who learn through experience that what promotes the public good also promotes their own private good. “So drives Self-love thro’ just and thro’ unjust, To one man’s power, ambition, lucre, lust: The same Self-love in all becomes the cause Of what restrains him, government and laws.” This sounds well and good but what is missing is any idea of how the market requires that profits cannot be made unless the needs and wants of consumers are met satisfactorily. In the first extract here from Epistle 3 we have a rather naive view of how government comes into being. This should be compared to the more realistic views of David Hume and Thomas Paine.