Home / Quotations / Wollaston on crimes against... 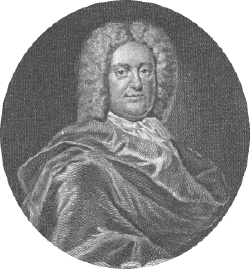 The English philosopher William Wollaston (1660-1724) argued that violations of another person’s natural rights are not only a crime but a denial or contradiction of a fundamental truth:

If a body of soldiers, seeing another body approach, should fire upon them, would not this action declare that they were enemies; and if they were not enemies, would not this military language declare what was false? No, perhaps it may be said; this can only be called a mistake… Suppose then, instead of this firing, some officer to have said they were enemies, when indeed they were friends: would not that sentence affirming them to be enemies be false, notwithstanding he who spoke it was mistaken?… I lay this down then as a fundamental maxim, That whoever acts as if things were so, or not so, doth by his acts declare, that they are so, or not so; as plainly as he could by words, and with more reality. And if the things are otherwise, his acts contradict those propositions, which assert them to be as they are.

William Wollaston wrote one best-selling work towards the end of his life which appeared in at least 8 editions. His main objective was to argue that “religion” was no more than “the pursuit of happiness by the practice of truth and reason”, but tucked within his Religion of Nature (1722) are some remarkable insights concerning the natural right to property and the idea that a violation of someone’s natural rights is not just a “crime” but a “lie” and a contradiction of a deeper underlying truth about the world. A person who violates a contract or kills an innocent person makes a powerful “statement” about themselves and those around them by means of action instead of by words. And these words or “action statements” are untrue and contradict the state of the natural world. They are also crimes in his view.