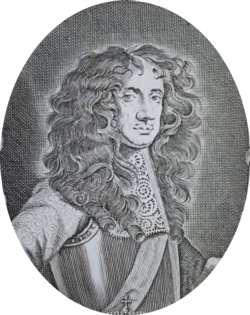 Found in Patriarcha, or the Natural Power of Kings

The defender of the theory of the divine right of kings, Sir Robert Filmer (1588-1653), thought that the idea of the “consent of the governed” would inevitably lead to anarchy:

Since nature hath not distinguished the habitable world into Kingdomes, nor determined what part of a people shall belong to one Kingdome, and what to another, it follows that the originall freedome of mankind being supposed, every man is at liberty to be of what Kingdome he please, and so every petty company hath a right to make a Kingdome by it self, and not only every City, but every Village, and every Family; nay, and every particular man a liberty to chuse himself to be his owne King if he please, and he were a mad man that being by nature free would chuse any man but himself to be his own Governour. Thus to avoid the having but of one King of the whole world, we shall run into a liberty of having as many Kings as there be men in the world, which upon the matter, is to have no King at all, but to leave all men to their naturall liberty, which is the mischief the Pleaders for naturall liberty do pretend they would most avoid.

In the aftermath of the English Revolution which saw the execution of a king (1649), the creation of a Commonwealth, and then the restoration of the monarchy (1660), defenders of the monarchy published posthumously Sir Robert Filmer’s vigorous defense of the divine right of kings, Patriarcha; of the Natural Power of Kings (1680). This in turn prompted John Locke to write a riposte - part 1 of the Two Treatises of Government. During the 1640s Filmer had clashed with advocates of limited, constitutional monarchy during the period of the Civil Wars and Leveller resistance to the absolute powers of King Charles I. He attacked Philip Hunton’s A Treatise of Monarchy (1643) which had argued for a limited “mixed monarchy” in a pamphlet from 1648 The Anarchy of a Limited or Mixed Monarchy. Locke would take up the idea of the consent of the government in the second Treatise (written 1679-83, published 1690). What is particularly interesting in Filmer’s argument is that he clearly sees the somewhat arbitrary way in which “consent to be governed” was framed. Did it apply all people who lived on earth; did it only apply to people living in a particular state or geographical area; did it also apply to children and women; was consent given at only one moment in time or renewed at periodic intervals to be legitimate? And if not, then why not, he asked? Filmer’s criticism was that whatever boundary one drew around the group who gave their consent to be ruled, the logical result had to be either that some individuals were denied the right to choose who governed them, or that the process had to be continued until there was “a liberty of having as many Kings as there be men in the world” or in other words a form of “anarchy” had been established.