William the Conqueror and the Kentishmen

Source: Augustin Thierry, History of the Conquest of England by the Normans; Its Causes, and its Consequences, in England, Scotland, Ireland, & on the Continent, translated from the seventh Paris edition, by William Hazlitt (London: H.G. Bohn, 1856). In 2 volumes. Vol. 1. Chapter: Appendix No. IX.

This splendid image of William the Conqueror appeared in volume 2 of Augustin Thierry's History of the Conquest of England by the Normans; Its Causes, and its Consequences, in England, Scotland, Ireland, & on the Continent, translated from the seventh Paris edition, by William Hazlitt (London: H.G. Bohn, 1856). 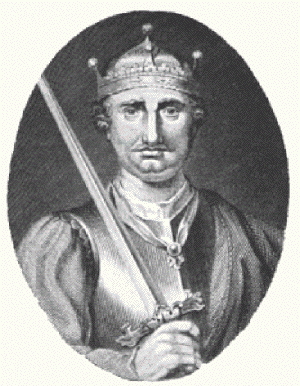 Thierry was an important classical liberal historian who was associated with Charles Comte and Charles Dunoyer and wrote for their journal Le Censeur. He introduced to them a class theory of history based upon the conflict between those who used force (as in conquest and taxation) and those who were the victims of that force (peasants and tax payers). In the Appendix to volume 2 Thierry includes a poem about William's failure to subdue the "Kentishmen" who refused to bow to his authority and forced William to allow them to keep their traditional laws. In return, the Kentishmen acknowledged William as King of England. We reproduce this poem below:

The valiant Courage and Policy of the Kentishmen which overcame William the Conqueror, who sought to take from them their Ancient Laws and Customs, which they retain to this day.1

When as the duke of Normandy
With glistering spear and shield,
Had entered into fair England,
And foil’d his foes in field:

On Christmas-day in solemn sort
Then was he crowned here,
By Albert archbishop of York,
With many a noble peer.

Which being done, he changed quite
The customs of this land,
And punisht such as daily sought
His statutes to withstand:

And many cities he subdu’d,
Fair London with the rest;
But Kent did still withstand his force,
And did his laws detest.

To Dover then he took his way,
The castle down to fling,
Which Arviragus builded there,
The noble British king.

Which when the brave archbishop bold
Of Canterbury knew,
The abbot of saint Augustine’s eke,
With all their gallant crew:

They set themselves in armour bright,
These mischiefs to prevent;
With all the yeomen brave and bold
That were in fruitful Kent.

At Canterbury did they meet,
Upon a certain day,
With sword and spear, with bill and bow,
And stopt the conqueror’s way.

“Let us not yield, like bond-men poor,
To Frenchmen in their pride,
But keep our ancient liberty,
What chance so e’er betide:

“And rather die in bloody field,
With manly courage prest,
Than to endure the servile voke,
Which we so much detest.”

Thus did the Kentish commons cry
Unto their leaders still.
And so march’d forth in warlike sort,
And stand at Swanscomb-hill:

There in the woods they hid themselves
Under the shadow green,
Thereby to get them vantage good,
Of all their foes unseen.

And for the conqueror’s coming there
They privily laid wait,
And thereby suddenly appal’d
His lofty high conceit;

For when they spied his approach,
In place as they did stand,
Then marched they to him with speed,
Each one a bough in hand.

So that unto the conqueron’s sight,
Amazed as be stood;
They seem’d to be a walking grove,
Or else a moving wood.

The shape of men he could not see,
The boughs did hide them so:
And now his heart with fear did quake,
To see a forest go.

Before, behind, and on each side,
As he did cast his eye,
He spi’d the wood with sober pace
Approach to him full nigh:

But when the Kentishmen had thus
Enclos’d the conqueror round;
Most suddenly they drew their swords,
And threw their boughs to ground;

Their banners they display in sight,
Their trumpets sound a charge,
Their ratling drums strike up alarms,
Their troops stretch out at large.

The conqueror, with all his train,
Were hereat sore aghast,
And most in peril, when they thought
All peril had been past.

Unto the Kentishmen he sent,
The cause to understand;
For what intent, and for what cause
They took this war in hand;

To whom they made this short reply:
“For liberty we fight,
And to enjoy king Edward’s laws,
The which we hold our right.”

Then said the dreadful conqueror:
“You shall have what you will,
Your ancient customs and your laws,
So that you will be still;

“And each thing else that you will crave
With reason at my hand;
So you will but acknowledge me
Chief king of fair England.”

The Kentishmen agreed thereon,
And laid their arms aside;
And by this means king Edward’s laws
In Kent doth still abide:

And in no place in England else
These customs do remain:
Which they by manly policy
Did of duke William gain.