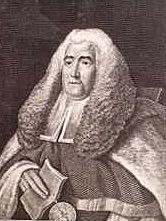 This month’s featured birthday anniversary is the English jurist and legal scholar Sir William Blackstone. He is best known for his profoundly influential Commentaries on the Laws of England (1769), which greatly influenced political and legal thinkers in both Great Britain and America well into the nineteenth century. Among his many famous dicta was: “It is better that ten guilty persons escape than one innocent suffer.”

Blackstone was born into a middle class family (his father was a textile merchant) in London, the last of four children. His father died before he was born, and his mother passed away when he was twelve, leaving him to be raised by his uncle, Thomas Biggs, a surgeon. He was educated at Charterhouse School and then at Pembroke College, Oxford, studying classics, logic, and mathematics. In 1743 he was elected to membership at All Souls College, Oxford, and by 1746 he had become a barrister. Never very successful, he decided to retire from his legal practice in 1753 and devote himself to lecturing on the law and helping institute some badly needed reforms at Oxford.

He was a tremendously popular lecturer, and his colleagues and students greatly admired his speaking style, which was simultaneously simple yet elegant. His lectures formed the core of his subsequent books, most famously his Commentaries. Legal scholars at the time and since then have sometimes criticized Blackstone for the inconsistencies and gaps in logic of some of his statements. Yet, it is widely agreed that his work represents one of the first attempts to construct a coherent legal system based on English Common Law. His books remained part of the standard legal training in England until after World War II, and they became extremely influential in the British North American colonies during the Founding Era and especially in the fledgling American republic. The statesmen of the time, particularly Alexander Hamilton, John Jay, and John Adams, were deeply influenced by Blackstone’s meticulous and methodical efforts to systematize a constitutional regime based on English Common Law. On the other hand, they (necessarily) rejected Blackstone’s deep ambivalence about John Locke’s views of revolution and popular sovereignty.

Another aspect of Blackstone’s work that influenced subsequent developments on both sides of the Atlantic (especially perhaps in the young USA), were his arguments in favor of a free press. Although he argued for the right of the government to prohibit “blasphemous, immoral, treasonable, schismatical, seditious or scandalous libels,” he defended a freedom of the press in general and argued especially against prior restraint of publication. His arguments for press freedom became extremely important in subsequent First Amendment case law in the United States, and as late as 1971 influenced the Supreme Court’s decision in the New York Times Corporation vs. The United States, better known as the “Pentagon Papers Case.”

In 1761 Blackstone was elected as a Tory representative to Parliament, the same year that he married Sarah Clitherow, with whom he would have nine children. In 1770 he was appointed Judge in the Court of Common Pleas, where he served (apparently without any particular distinction) until his death.

A long-time sufferer from gout, in November 1779 he suffered a series of neurological and physical attacks, manifested mainly by dizziness and high blood pressure (perhaps the result of diabetes). His condition continued to deteriorate steadily, and he died on February 14, 1780.