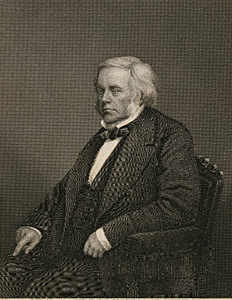 This month’s featured birthday anniversary is the British activist and politician John Bright. He was born into a Quaker family in Rochdale, Lancashire to Jacob and Martha Wood Bright, their eldest surviving child in a family of eleven children. His father, a matter-of-fact man of correct but blunt manners, had founded and owned a cotton mill, where he was well known as a benevolent employer, while his mother was known as a sensitive and imaginative woman of great taste and refinement. People later remarked that he inherited character traits from both of them. Bright was educated in different Quaker schools, where he developed a deep knowledge and love of the Bible and its stories, English literature (especially Milton, an interest fostered by his mother), as well as a commitment to social causes, especially equality and peace. At the age of 16 he went to work at his father’s mill.

By his early 20s Bright had already begun to express an interest in politics and social reform. In the mid 1830s he launched a campaign against local taxes being used to fund the Anglican Church. He soon became involved in other liberal causes such as the broadening of the franchise and, most importantly, the Anti-Corn Law League. He became second only to his friend Richard Cobden as the best known and most vigorous advocate of the abolition of the Corn Laws. In 1843 he was elected Member of Parliament for Durham, which gave him the opportunity to continue to press for the abolition of the Corn Laws, which were finally repealed in 1846.

In the meantime he had met and married fellow Quaker Elizabeth Priestman in 1839. She died of tuberculosis only two years later in 1841, leaving him with a baby daughter. He was married again, in 1847, to another Quaker, Mary Elizabeth Leatham, with whom he had four sons and three daughters.

After his legislative victory in repealing the Corn Laws, Bright’s next big fight was over Great Britain’s impending conflict with Russia in what became known as the Crimean War (1853-1856). Bright saw the conflict as not only anti-Christian and immoral, but bad for free trade and not in Great Britain’s national interest. He especially blamed Lord Palmerston’s government and craven and mendacious aristocrats for Britain’s bellicose foreign policy (as he had blamed the same class for the ruinous Corn Laws). He once again brought his prodigious oratorical skills to bear, but the war enjoyed broad public support, and he lost not only his anti-war campaign, but his seat in parliament as well. Later, the events of the so-called Sepoy Mutiny of 1857 furthered his anti-war and anti-imperialist predilections, and he called for allowing the peoples of India to be able to elect their own leaders, again with no success. Exhausted and frustrated by his failed peace campaign and the loss of his seat in parliament, he suffered a nervous breakdown in 1856, from which he did not fully recover for two years. By 1858 he felt well enough to run for, and win, the parliamentary seat for Birmingham, which he was to hold for the rest of his life.

For most of the rest of his career his energies focused on political reform, especially the extension of the franchise and removing various legal disabilities from religious dissenters and nonconformists. In these struggles he found some success, and he supported the Reform Act of 1867 which broadened the franchise (though it still excluded many people, such as landless laborers and women). He involved himself in the reform movement for Ireland as well. Though he came to oppose Home Rule, he successfully fought for greater religious and political liberty for Catholics and helped pass land reforms making it possible for Catholic peasants to own their own land. During this period he also supported the Union in the American Civil War, due to his life-long opposition to slavery. A little later he served as Prime Minister Gladstone’s President of the Board of Trade in 1868, and in two more of Gladstone’s cabinets (1873-1874, 1880-1882), resigning over Britain’s invasion of Egypt in 1882. By then he was a well known and highly respected politician, despite his increasingly irascible nature. He was particularly admired for the power and brilliance of his speeches. (He is credited with coining the term “mother of parliaments” to refer to the English parliament, as well as inventing the expression, “to flog a dead horse”) His last years were characterized by ill health (He suffered another nervous breakdown in 1870) and loneliness (His wife died in 1878). He died on March 27, 1889 and was buried in the Friends’ Meeting House in Rochdale.