Pufendorf and the Geometry of Morality 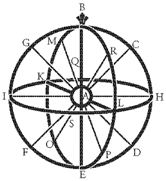 In Chapter XVIII of his Two Books of the Elements of Universal Jurisprudence, Samuel Pufendorf makes an argument about the "geometry of moral actions", comparing them to the arc of a circle made by moving radii. In his own words:

And so, also, considered formally and precisely, one good action is not better than another, since, forsooth, nothing can be more right than the right, although, considered materially and on the score of its object, one action is superior to and nobler than another. But, since an evil action declines from the law, it assuredly is at a certain distance from the law, greater or less, from which a sin obtains the character of greater or less degree, as one deviation from a straight line is greater than a second. Now this divergence from the law is like neither length, breadth, nor depth, which can be measured by a straight line; but it resembles a rectilinear angle, whose magnitude is measured by the arc of a circle described from the point of intersection of the two sides as a centre, and intercepted by the aforesaid sides. For, as a rule of law, which, like a straight line, marks out by its course precisely what is to be done, has the character of the first side; so the determination of our will, which is always joined by our conscience to the rule of the law in what resembles the point of an angle, is the other side, which, if the action swerve aside from the law, has a certain angular distance, as it were, from the first side, and by this the degree of bad actions is estimated. But, as around any point in space in which two or more lines unite, when treated as the centre of a sphere, an infinite number of tracts are conceived to be gathered, to which straight lines can run, diverging in different modes from one another; so the number of ways is infinite by which bad actions will be able to take their course, in diverging from a rule of the law. And so we shall not incongruously picture to ourselves the field of moral actions in the shape of a sphere, in whose centre gather the sides of the moral angle, like the radii of a circle; but on whose surface there are marked the points of the tracts to which the radii tend. Now as a sphere is marked by three cardinal circles, as they might be called, whose common circumferences, planes, and diameters strike each other at right angles, such as are the horizon, the meridian, and the prime vertical, in the mundane sphere, the first of which embraces the sphere’s tract of latitude and longitude, and the second its thickness, while the last divides the first two into two parts, and the whole sphere into a polar and an antipolar hemisphere; so, likewise, in the moral sphere, there are marked three cardinal circles, as they may be called, the first of which, like the horizon, represents the limits and object with which the moral action has to do, and represents the exercise itself; the second, like the meridian, suggests the elevation, as it were, and the intention of the mind of the agent; the third, like the prime vertical, divides the former two into two parts, and delimits the whole sphere into a polar and an antipolar hemisphere.

For more of the same, read the entire chapter, along with its appendix.

Source: Samuel von Pufendorf, Two Books of the Elements of Universal Jurisprudence, translated by William Abbott Oldfather, 1931. Revised by Thomas Behme. Edited and with an Introduction by Thomas Behme (Indianapolis: Liberty Fund, 2009). Chapter: DEFINITION XVIII: The quantity of moral actions is the estimative measure by which they are said to be of a certain degree.

Copyright: The copyright to this edition, in both print and electronic forms, is held by Liberty Fund, Inc.