Home / Essays / About us / Images of Liberty and Power / Emancipation Proclamation

This decorative print of the Emancipation Proclamation of 1863 was produced in 1864 by engraver W. Roberts, and the printer, C.A. Alvord. The print does far more than just record the text of the proclamation. It provides an illustrated narrative of the document’s importance, and makes visible the changes hoped for from the emancipation of Black Americans. 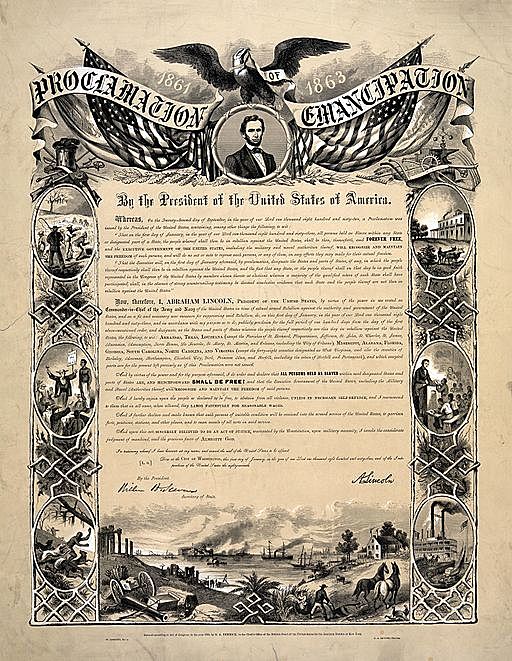 The bold type chosen for the words “All persons held as slaves” and “shall be free” distills the vital information of the proclamation for all readers, and the images surrounding the text help to provide a summary of the document for those who cannot read and to amplify its importance for those who can.

At the top of the image, a bald eagle holds a banner with the title of the document in its beak. Immediately under its wings are the dates 1861 (Lincoln’s inauguration) and 1863 (the date of the Proclamation.) Centered beneath the dates and surrounded by flag bunting and the words “Liberty” and “Human Rights” is a cameo portrait of Abraham Lincoln.

But it is the side columns of the image that provide the richest context for the document they frame. The left hand column has, at its head, implements of war and destruction: swords, guns, a drum, and a solider’s hat. Beneath are ovals with images of the brutality of slavery: Slaves being whipped in a field; a slave auction; two slaves being harried by dogs as they run for freedom. Between these ovals are engravings of pine and oak branches--wild and uncultivated trees, unproductive of nourishment for humans.

The right hand column presents a vastly different world. At its head one finds farming implements: a plough; a rake; a harrow; an anvil, and a flyball governor for a steam engine. The swords from the left hand column have, quite literally, been turned to ploughshares. The ovals beneath depict a pastoral farming scene, the education of freed Americans, and an image of trade and commerce by ship. The pine and oak from the left hand column have been replaced by succulent fruits--products of human cultivation and supporters of human life.

At the bottom of the page, the contrast between the old and the new continues, as the left side of the image portrays war and destruction, while the right side depicts productive farming, trade, innovation, and commerce.

The clear message of the image is that the Emancipation Proclamation will usher in a new world of peace and prosperity, with new opportunities for all Americans to flourish.