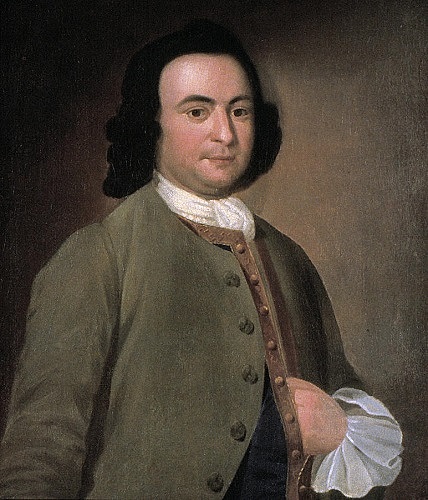 This month’s featured birthday anniversary is the American statesman and politician, George Mason IV.  His main contribution to the founding era was an unshakable belief in inalienable, individual rights, which manifested itself in his insistence on the inclusion of a Bill of Rights in the Constitution.

He was born in Fairfax County into a wealthy family.  His father died when he was ten years old and he was brought up by his uncle, John Mercer, who owned a library of over a thousand volumes, which greatly influenced his nephew.  Although he had a life-long aversion to the business of politics (as opposed to political philosophy, which he relished) he was elected to the House of Burgesses for Fairfax county in 1759.  The following year he began construction of a mansion for himself on the family property that he named Gunston Hall.  In the meantime, in 1750, he married Ann Elibeck, the sixteen year old daughter from a wealthy Maryland family.  By all accounts they had a very happy marriage, but Ann Mason died in 1773 shortly after the premature birth of twins, their eleventh and twelfth children, who themselves died in infancy.  Mason remarried in 1780, to Sarah Brent, the fifty year old daughter of a family friend.

While married to Ann, George Mason lived the life of country squire, taking great interest in his estate which he surrounded by increasingly elaborate gardens.  He also tried to diversify his plantation crops away from tobacco (the dominant plantation crop in the area) by leasing plots to tenant farmers, and by growing wheat for export.  He, with his friend Thomas Jefferson, also established a fledgling wine industry in Virginia, with the help of Jefferson’s friend, the Italian humanist and physician Filippo Mazzei (who subsequently also acted as a gun-runner to the American revolutionaries during the War of Independence).

Mason was an early and fervent supporter of the independence movement, and some of his ideas about individual rights influenced Thomas Jefferson’s language in the Declaration of Independence.  Never in the best of health (he suffered from chronic attacks of gout) he saw little action in the Revolution, but remained an avid supporter of the cause.  He drafted Virginia’s revolutionary constitution in 1776 (subsequently widely used as a model for other state constitutions)and Virginia’s Declaration of Rights, which has long been considered one of the many influences on Jefferson's draft of the Declaration of Independence. Particular attention has been paid to Mason's first draft of May of 1776 where he wrote "That all Men are born equally free and independent, and have certain inherent natural Rights, of which they can not [sic] by any Compact, deprive or divest their Posterity; among which are the Enjoyment of Life and Liberty, with the Means of acquiring and possessing Property, and pursuing and obtaining Happiness and Safety."  Mason's Declaration of Rights also influenced the federal Bill of Rights in the US Constitution.

Whether or not to include a Declaration of Rights in the Constitution became a major issue when Mason was elected as one of Virginia’s delegates to the Constitutional Convention in Philadelphia in 1787.  He rapidly found himself allied with the “Anti-Federalist” faction at the convention which opposed the emerging Constitution as instantiating a central government (and especially Chief Executive) that they viewed as far too powerful.  Mason’s particular points of opposition, however, centered on the issue of the international slave trade, which he wanted the Constitution to abolish immediately, and the matter of a Bill of Rights, which he demanded be included in the text. He eventually found himself almost completely isolated over his continued insistence on these points, and even had a falling out with his old friend George Washington over his opposition to the Constitution.  He ended up as one of a handful of delegates to the convention who would not sign the final document, and he subsequently argued against Virginia’s ratification of the Constitution.  As it turned out, a Bill of Rights (in the form of the first ten amendments) was eventually included in the Constitution in 1791, but the USA continued to participate in the Atlantic slave trade until 1808, as detailed in the Constitution.

Mason’s position regarding slavery, in fact, remains one of his most contested legacies.  While his opposition to the slave trade was adamant and vociferous, as noted above, his attitude toward slavery itself was more ambivalent.  Unlike many of his friends and contemporaries (such as Jefferson and Washington) he never manumitted any of his slaves, even in his will.

In the Summer of 1792 the entire Mason household came down with a severe illness of some sort, possibly flu, from which Mason never fully recovered, even while he continued to suffer from attacks of gout.  He died on October 7 of that year.