Home / Titles / The Tale of Beowulf, sometime King of the Folk of the Weder Geats

The Tale of Beowulf, sometime King of the Folk of the Weder Geats 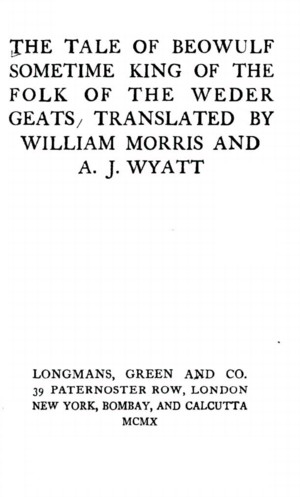 An English translation of the tale. Beowulf is one of the first literary masterpieces of the English language, written in Old English in the eleventh century. The story itself is thought to have been originally composed sometime between 700 and 750. Although certain places and events are indeed historical, the main character of the story, Beowulf, is thought to be a fictional, archetypal hero. It recounts the life of Prince Beowulf of the Scandinavian Geats, who fights various monsters, returns to his father’s kingdom a hero and soon becomes king himself, ruling for fifty years in peace until a frightful dragon appears. Once more Beowulf must fulfill his responsibilities, even unto his own destruction.

The Tale of Beowulf, sometime King of the Folk of the Weder Geats, trans. William Morris and A.J. Wyatt (London: Longmans, Green, and Co., 1910).