Home / Titles / Extraordinary Black Book: An Exposition of Abuses in Church and State (1832) 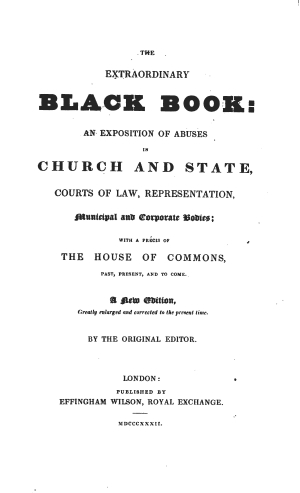 Extraordinary Black Book: An Exposition of Abuses in Church and State (1832)

An extraordinary document which details the corruption and financial abuses of the British government ax well as the sinecures and privileges of the army, church, and other groups. It was drawn up by John Wade as part of the radical movement to expand the franchise in England in 1832.

The Extraordinary Black Book: An Exposition of Abuses in Church and State, Courts of Law, Representation, Municipal and Corporate Bodies; with a Précis of the House of Commons, Past, present, and to come. A New Edition, greatly enlarged and corrected to the present time. By the Original Editor. (London: Effingham Wilson, Royal Exchange, 1832).