The Principles of Moral and Christian Philosophy. Vol. 1 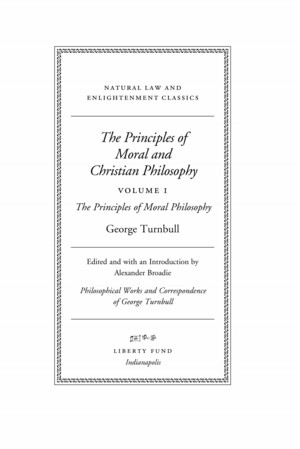 The Principles of Moral and Christian Philosophy presents the first masterpiece of Scottish Common Sense philosophy. This two-volume treatise is important for its wide range of insights about the nature of the human mind, the foundations of morals, and the relationship between morality and religion. In order to understand the Enlightenment in Scotland, Turnbull’s work must be put next to that of Francis Hutcheson. In the first volume, The Principles of Moral Philosophy, Turnbull presents a detailed study of the faculties of the human mind and their interrelations. He contends that moral philosophy should be treated as one part, the highest part, of natural philosophy, and not as a field requiring its own distinctive methodology.