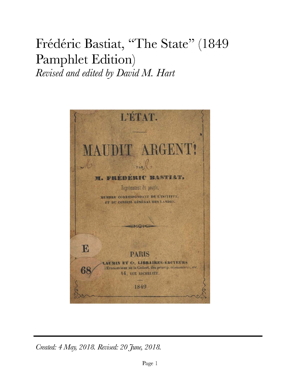 This is a thoroughly revised edition of one of Bastiat’s best known essays. It is the third and longest version he wrote between June 1848 and April 1849 when he was engaged in challenging the growing socialist movement on the streets of Paris and in the National Assembly. It contains an Introduction which explains the evolution of the essay over this period, the differences between the versions, and material on the main group of socialists, the Montagnards, whose election manifesto Bastiat took issue with. The translation has been extensively revised by David M. Hart to make it more consistent with our editorial practices as established in vols. 3, 4, and 5 of our Collected Works of Bastiat translation project. There are additional notes to explain the political and intellectual context in which he was writing and all quotations of other authors used by Bastiat have been located and referenced.

For further information see the Summary of the Bastiat Project.