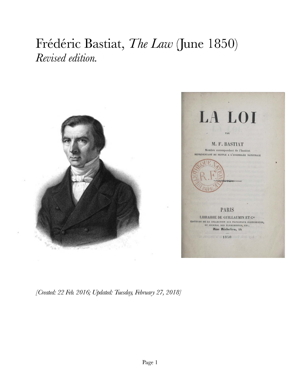 This is a revised edition of Liberty Fund’s translation of Bastiat’s famous essay on The State which was one of the last things he wrote before he died in 1850. It has been extensively revised by David M. Hart to make it more consistent with our editorial practices as established in vols. 3, 4, and 5 of our Collected Works of Bastiat translation project. There are additional notes to explain the political and intellectual context in which he was writing, all quotations of other authors used by Bastiat have been located and referenced, there are cross-references to other works by Bastiat where he makes similar arguments, and key words and concepts which are part of his economic and political theory have been flagged. The new HTML version is available online here The Law. PDF and other versions are available below. The original edition can be found here. See also the Summary of the Bastiat Project for details.