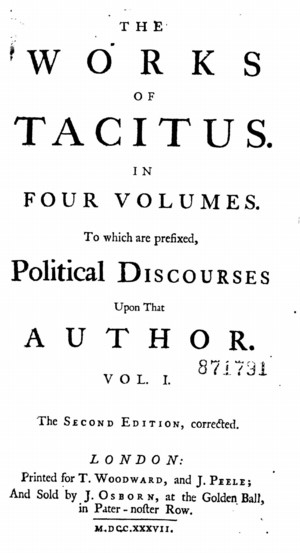 The historical works of Tacitus are a history of the period from A.D. 14 to 96 in thirty volumes. Although many of the works were lost (only books 1-5 of the Histories and 1-6 and 11-16 of the Annals survive), enough remains to provide a good sense of Tacitus’s political and moral philosophy. He recognized the necessity for strong rulers but argued that more should be done to manage the succession of power and allow for the ascension of talent. Tacitus asserted that it was the dynastic ambitions of Rome’s many emperors that caused the decline of moral and political life and precluded the possibility of recruiting leaders of real ability. Moreover, the dynastic temptation caused political instability because military force was now required for political change. His works point to the necessity of systematic institutional restraints on power for the preservation of liberty. Gordon’s translation and his lengthy Discourses on Tacitus bring Tacitus’ ideas up to date and apply them to the British state of the early 18th century.

The Works of Tacitus. In Four Volumes. To which are prefixed, Political Discourses upon that Author by Thomas Gordon. The Second Edition, corrected. (London: T. Woodward and J. Peele, 1737).