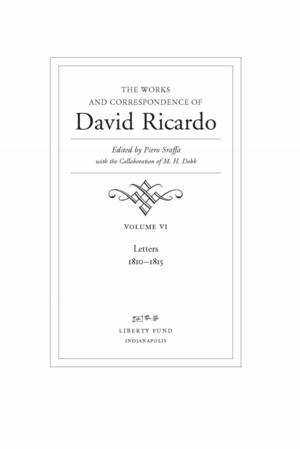 Volume 6 is the introductory volume to the four volumes containing relevant letters between Ricardo and many influential thinkers of his age. Many of these letters influenced the development of Ricardo’s ideas on political economy. The letters within this volume span the years of Ricardo’s economic thought throughout 1814 and 1815. This is the period of Ricardo’s life leading up to the publication of his Essay on the Influence of the Low Price of Corn on the Profits of Stock (1815), which formed the basis of his most significant contributions to political economics. This volume contains a preface to the entire series of 555 letters and introductory notes. The introductory notes to the correspondence explain the thematic coordination of the letters and provide brief biographical comments on Ricardo’s correspondents, paying special attention to their personal relationship to Ricardo and their political economic relevance.