Home / Titles / Translations of Shakuntala and Other Works

Translations of Shakuntala and Other Works 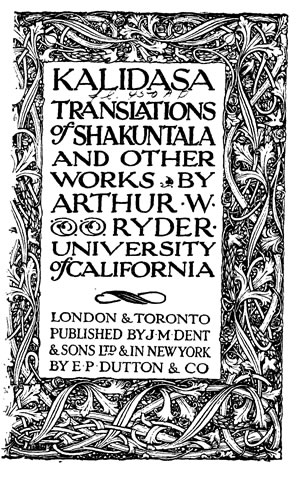 A collection of Sanskrit plays by Kalidasa who influenced late eighteenth- and early nineteenth-century European literature. His work is noted for its portrayal of the unity of duty to one’s family, religion, and society and the normative role of nature in the human world. His characters constantly make choices to uphold obligations to the institutions of faith, kin, and country in the face of terrible ethical dilemmas, thereby illustrating the ideal of virtue. In regard to the natural (nonhuman) world, Kalidasa assumed the fundamental unity of all life and recognized the dignity and value of nonhuman life.

Translations of Shakuntala and Other Works, by Arthur W. Ryder (London: J.M. Dent, 1920).