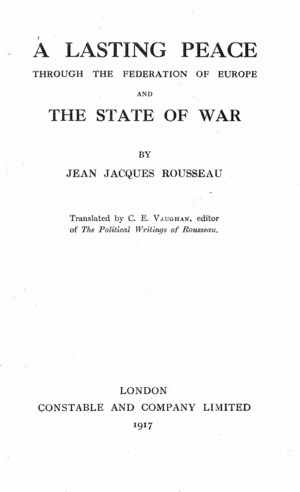 Two essays by Rousseau on the issue of war written during the mid 1750s. The first is a critique of the abbé Saint-Pierre’s ideas on the prospects of a European Federation to reduce the likelihood of war. The second is his attempt to formulate a theory of just war. The edition is interesting for having been published towards the end of the First World War.

A Lasting Peace through the Federation of Europe and The State of War, by Jean Jacques Rousseau, trans. by C. E. Vaughan. (London: Constable and Co., 1917).