Pictures of the Socialistic Future 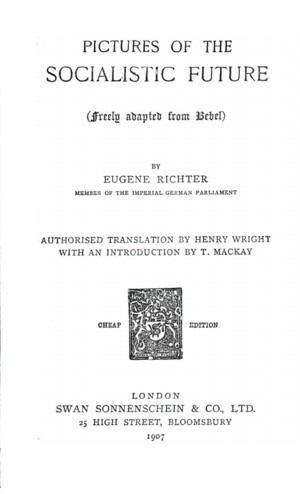 Pictures of the Socialistic Future is Richter’s satire of what would happen to Germany if the socialism espoused by the trade unionists, social democrats, and Marxists was actually put into practice. It is thus a late 19th century version of Orwell’s 1984, minus the extreme totalitarianism which Orwell had witnessed in Nazi Germany and Stalinist Russia but which was still inconceivable to 19th century liberals. The main point of the book is to show that government ownership of the means of production and centralised planning of the economy would not lead to abundance as the socialists predicted would happen when capitalist “inefficiency and waste” were “abolished”. The problem of incentives in the absence of profits, the free rider problem, the public choice insight about the vested interests of bureaucrats and politicians, the connection between economic liberty and political liberty, were all wittily addressed by Richter, much to the annoyance of his socialist opponents.