Home / Titles / The Triumph of the Cross

The Triumph of the Cross 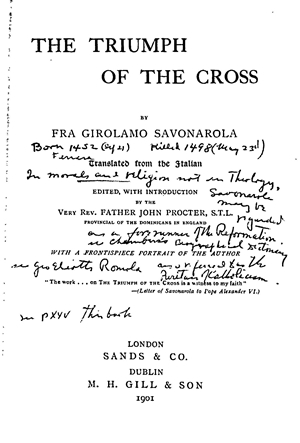 Savonarola wrote this book to show what were his real feelings as regards the Catholic Faith and the Apostolic See; and that he might refute the accusation of heresy and schism, which had been laid to his charge by his adversaries. It is divided into four books, of which the first treats of the existence, nature, and providence of God, and proves the immortality of the soul of man. In the second the author shows, by various arguments, how the Christian faith is in accord with truth and reason. He proceeds, in the third, to point out that there is nothing, intrinsically, or extrinsically, impossible in the chief mysteries of the Christian faith, and that they are not, in any way, at variance with reason. The fourth book is mainly devoted to an exposition of the truth of the religion taught by Christ.

The Triumph of the Cross, trans. from the Italian, edited, with an Introduction by the Very Rev. Father John Procter, S.T.L. With a frontispiece portrait of the author (London: Sands & Co., 1901).