Home / Titles / The Parallel Bible. Old and New Testaments (KJV and Revised Version) / The Second Epistle of Paul the Apostle to the Corinthians (KJV)

The Second Epistle of Paul the Apostle to the Corinthians (KJV) 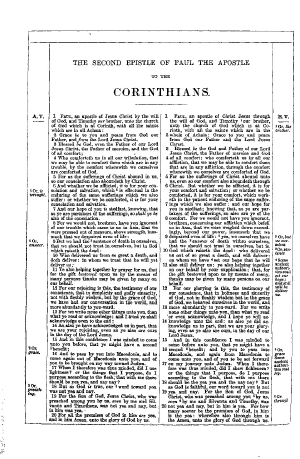 Paul the Apostle has been the most influential of the early members of the church. His writings make up nearly one-third of the New Testament. Paul’s role as an apostle of the church gave him the opportunity to correspond with the communities he shepherded. His letters to them, the Epistles of Paul, form a major portion of the New Testament. Written in response to concerns of Paul or the community, these letters were fundamental in establishing Christian doctrine.

The Parallel Bible. The Holy Bible containing the Old and New Testaments translated out of the Original Tongues: being the Authorised Version arranged in parallel columns with the Revised Version (Oxford University Press, 1885). The Second Epistle of Paul the Apostle to the Corinthians.