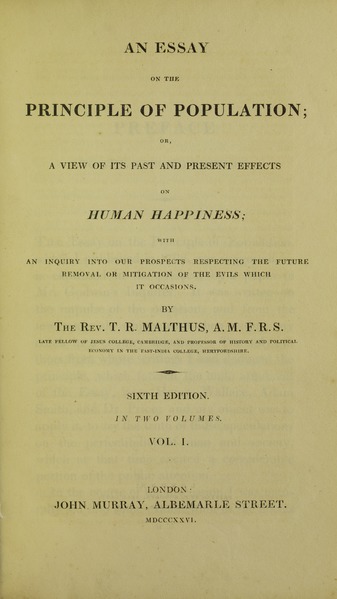 This is the 6th expanded edition of the work. There are two versions of Thomas Robert Malthus’s Essay on the Principle of Population. The first, published anonymously in 1798, was so successful that Malthus soon elaborated on it under his real name. The rewrite, culminating in the sixth edition of 1826, was a scholarly expansion and generalization of the first. In this work Malthus argues that there is a disparity between the rate of growth of population (which increases geometrically) and the rate of growth of agriculture (which increases only arithmetically). He then explores how populations have historically been kept in check.

An Essay on the Principle of Population, or a View of its Past and Present Effects on Human Happiness; with an Inquiry into our Prospects respecting the Future Removal or Mitigation of the Evils which it Occasions (London: John Murray 1826). 6th ed. 2 vols.