Home / Titles / Karl Marx and the close of his system, a criticism 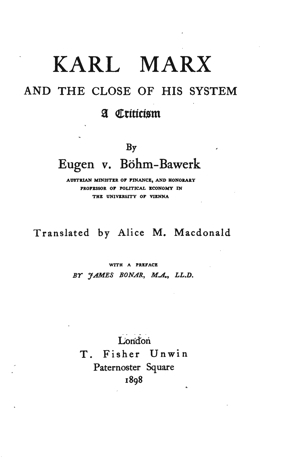 Karl Marx and the close of his system, a criticism

A translation of Böhm-Bawerk’s devastating review of Karl Marx’s Das Kapital vol. 3 which had been published posthumously in 1894 by Engels.

Karl Marx and the close of his system, a criticism. Translated by Alice M. Macdonald with a Preface by James Bonar (London: T. Fisher Unwin, 1898).

“Now Marx’s hypothesis assumes that the prices of the commodities I and II are determined exactly in proportion to the amounts of labor expended in their production, so that the product of six years’ work in commodity I only brings as much as the total produce of six years’ work in commodity II. And further, it follows from this that the laborer in commodity I should be satisfied to receive for every year’s work, with an average of three years’ delay of payment, the same return that the laborer in commodity II receives without any delay; that therefore delay in the receipt of payment is a circumstance which has no part to play in the Marxist hypothesis, and more especially has no influence on competition, on the crowding or under-stocking of the trade in the different branches of production, having regard to the longer or shorter periods of waiting to which they are subjected.”