Home / Titles / The Parallel Bible. Old and New Testaments (KJV and Revised Version) / The Gospel According to S. John (KJV)

The Gospel According to S. John (KJV) 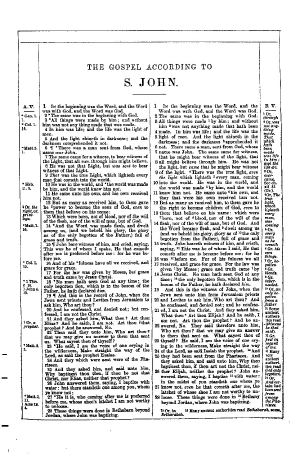 The Fourth Gospel of the New Testament. A parallel version with the King James Version in one column and the revised Version in another column. Although the Gospel of John is radically different from the three synoptic Gospels, it has a unique “spiritual” role. The Fourth Gospel and the epistles appear to have been written with a knowledge of the other Gospels, which predate them. John focused on more spiritual matters, however, such as the dual nature of Christ, his relationship to God the father, false prophets, salvation, and the importance of divine love in this scheme.

The Parallel Bible. The Holy Bible containing the Old and New Testaments translated out of the Original Tongues: being the Authorised Version arranged in parallel columns with the Revised Version (Oxford University Press, 1885). The Gospel according to S. John.