Home / Titles / The Parallel Bible. Old and New Testaments (KJV and Revised Version) / The Book of the Prophet Jeremiah (KJV)

The Book of the Prophet Jeremiah (KJV) 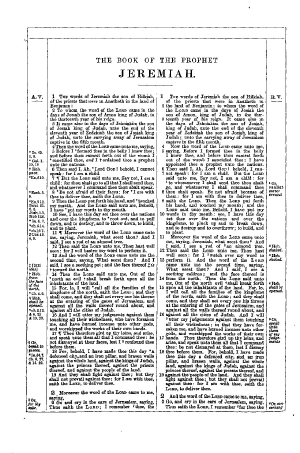 Significant portions of the Book of Jeremiah refer directly to the sensitive political situation of Judah in the late seventh and early sixth centuries B.C. Like the other prophets, Jeremiah abhorred the sin and idolatry prevalent in the Judah of his day. Also like them, he predicted ruin for the kingdom and, more immediately, the destruction of the Temple of Jerusalem if the people did not change their ways. He emphasized that such change would require individual commitment to and search for God rather than reliance on ritual attendance at the temple or the performance of physical rites

The Parallel Bible. The Holy Bible containing the Old and New Testaments translated out of the Original Tongues: being the Authorised Version arranged in parallel columns with the Revised Version (Oxford University Press, 1885). The Book of the Prophet Jeremiah.