The Hague Peace Conferences concerning the Laws and Usages of War 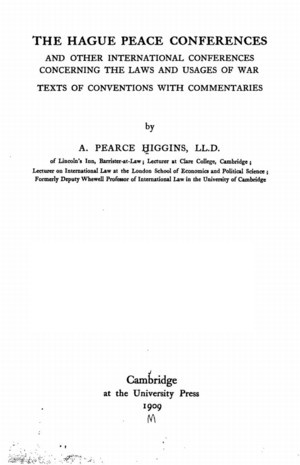 This volume contains the text (often in both French and English) of the major conventions concerning peace and the laws of warfare from the Declaration of Paris (1856), the Geneva Convention of 1864, of the two Peace Conferences in the Hague of 1899 and 1907. The topics covered are the commencement of hostilities, the laws of war on land, the status of merchant shipping, the rights of neutrals, the use of sea mines, projectiles from balloons, and poisonous gas.

The Hague Peace Conferences and Other International Conferences concerning the Laws and Usages of War. Texts of Conventions with Commentaries, by A. Pearce Higgins, LL.D. (Cambridge University Press, 1909).