Selected Writings of Ludwig von Mises, vol. 1: Monetary and Economic Problems Before, During, and After the Great War 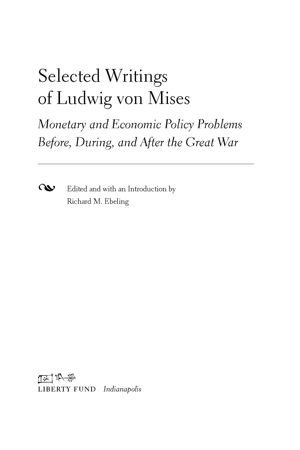 Vol. 1 of a three volume collection. The articles that compose this book include Mises’s policy memoranda, essays, and speeches that were found in a formerly secret KGB archive in Moscow. They deal with Mises’s thoughts on the monetary, fiscal, and general economic policy problems of the Austro-Hungarian Empire before and during World War I, and the new postwar Austrian Republic after the dismantling of the Habsburg monarchy. An appendix contains a curriculum vitae that Mises’s great-grandfather prepared for the Habsburg emperor in 1881 as part of his ennoblement, and a talk delivered at his private seminar at his office in the Vienna Chamber of Commerce in the spring of 1934 on the topic of the methodology of the social sciences.

Selected Writings of Ludwig von Mises, vol. 1: Monetary and Economic Problems Before, During, and After the Great War, edited and with an Introduction by Richard M. Ebeling (Indianapolis: Liberty Fund, 2012).