The Origin of Species vol. 2 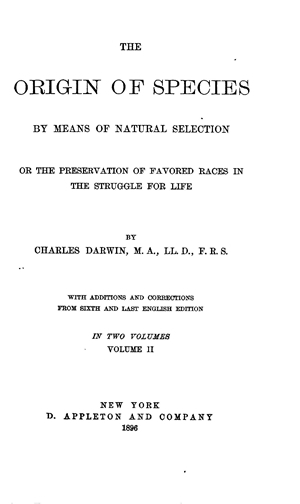 Vol. 2 of a two volume set. Perhaps Darwin’s greatest book in which he put forward the idea that all species evolve over time from common ancestors by a process which he called “natural selection.” It was based upon the evidence he had accumulated when he traveled on the H.M.S. Beagle for its 2nd voyage to survey South America between 1831-36.

The Origin of Species by means of natural selection or the preservation of favored races in the struggle for life, with additions and corrections from the sixth and last English edition, in two volumes (New York: D. Appleton and Co., 1896). Volume 2.