Treatise on the Laws 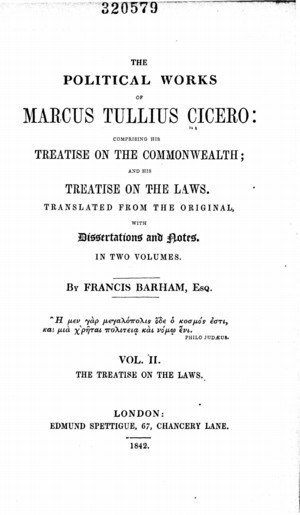 The Treatise on the laws is Cicero’s imitation of Plato’s dialogue The Laws where he develops a Stoic theory of natural law as right reason. This book became very influential during the middle ages.

The Political Works of Marcus Tullius Cicero: Comprising his Treatise on the Commonwealth; and his Treatise on the Laws. Translated from the original, with Dissertations and Notes in Two Volumes. By Francis Barham, Esq. (London: Edmund Spettigue, 1841-42). Vol. 2.