The First Book of Samuel (KJV) 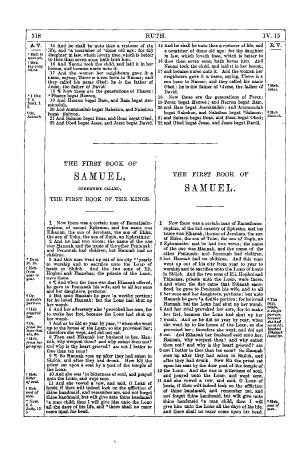 The two Books of Samuel deal with the close of the period of judges and the rise of the monarchy in Israel, especially Saul and David. The first book deals with the life of Samuel as a judge, different accounts of the origin of the monarchy with Saul as the first king of Israel, the victory over the Philistines, the slaying of Goliath, David and Saul as adversaries, and the death of Saul and his sons in battle.

The Parallel Bible. The Holy Bible containing the Old and New Testaments translated out of the Original Tongues: being the Authorised Version arranged in parallel columns with the Revised Version (Oxford University Press, 1885). The First Book of Samuel.