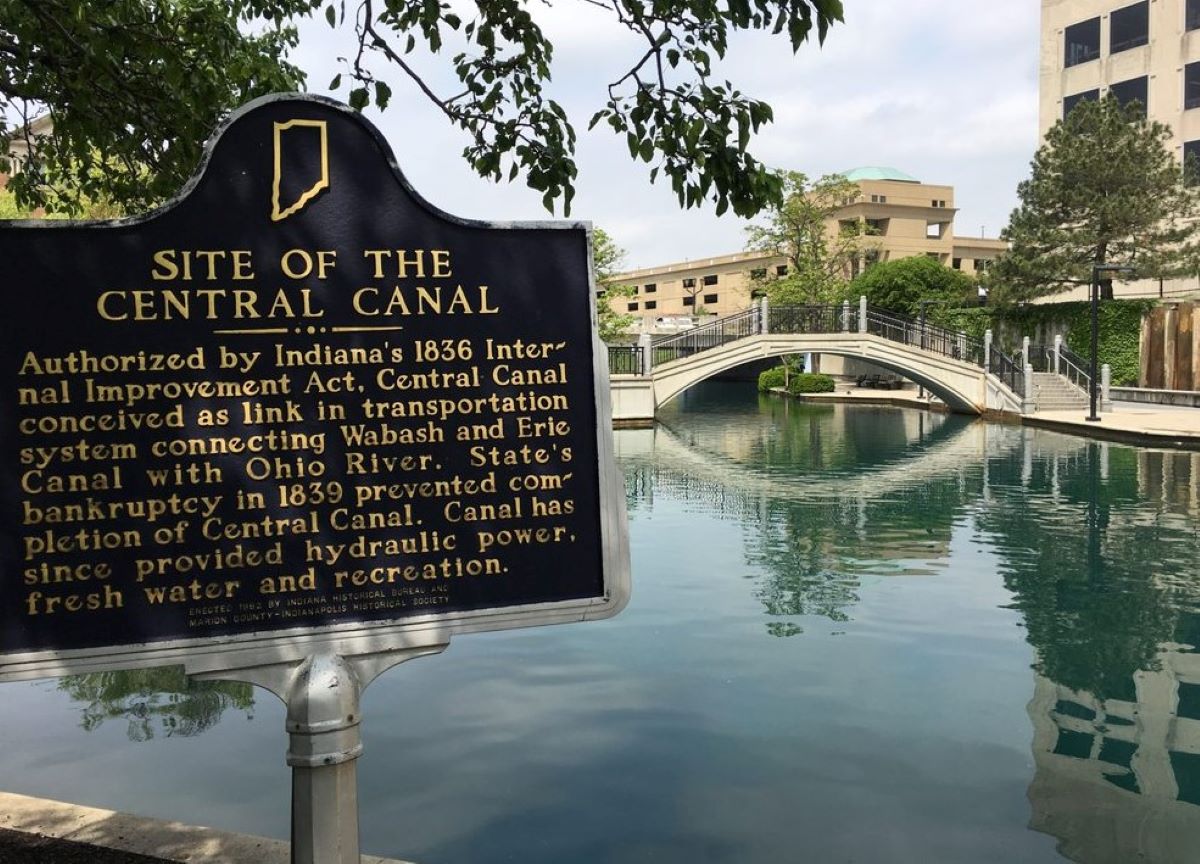 Whenever I drive through parts of my hometown of Indianapolis, I cross a small waterway with a trail running alongside - the Central Canal.
Today, it’s a recreational area, with people walking and biking along its towpath and enjoying the serenity of the water nearby.
But that canal represents a fundamental lesson in Indiana’s past and one that has altered the state’s constitution for more than 170 years. That lesson remains a warning and instruction to policymakers today who pursue big projects coupled with long-term costs.

In 1851, the young state of Indiana, just 35 years old, tore up its Constitution and started from scratch. One of the main clauses in the new document prohibited the state from accruing debt. It has led to the state carrying surplus funds in its accounts for decades.
The reasons why are contained in the canals.
In 1836, the state was young, small, poor and ambitious. It was growing: the population doubled from from 343,081 in the 1830 census to 685,866 in 1840, but the state didn’t have a single one of the nation’s largest 100 cities.
The  state government, led by governor Noah Noble, decided the path to prosperity was state-funded internal improvements. At the time, the cheapest and fastest method of commerce was by boat, as it was in Adam Smith’s lifetime. As Smith wrote in the Wealth of Nations, opening the state up to water-commerce could lead to prosperity.

Good roads, canals, and navigable rivers, by diminishing the expense of carriage, put the remote parts of the country more nearly upon a level with those in the neighborhood of the town. They are upon that account the greatest of all improvements. They encourage the cultivation of the remote, which must always be the most extensive circle of the country. They are advantageous to the town, by breaking down the monopoly of the country in its neighborhood….. Though they introduce some rival commodities into the old market, they open many new markets to its produce. [Wealth of Nations, Book 1, Chapter XI]

That was the draw for state policymakers. Indiana is relatively flat, but also lacks large-scale navigable rivers. At the north end is Lake Michigan and, via Ohio, Lake Erie. The Ohio River, the great inland river connecting the Midwest with the Mississippi and eventually the Gulf of Mexico, marks the southern border. In the eyes of the state’s policymakers, if a canal could connect the two, it would make the state a key crossing with access to both northeastern markets via the Great Lakes and western markets via the Ohio and Mississippi Rivers.
So the Mammoth Internal Improvements Act of 1836 was enacted, authorizing the construction of three major canals--completing the Wabash & Erie Canal from Lafayette to Terre Haute, which would connect Lake Erie with the navigable parts of the Wabash River, which eventually empties into the Ohio River. It also funded the Whitewater Canal linking the Ohio River with the National Road in Richmond, running through the hilly southeastern part of the state near the Ohio border, and the Central Canal, which would run from the north-central part of the state in Peru to Indianapolis and eventually southwest to Evansville.
A number of other road projects and a railroad from the Ohio River port of Madison to the capital in Indianapolis were also part of the bill. A newly-created Bank of Indiana would issue $10 million in bonds - equal to a decade’s worth of tax collections - at 5% interest.
Historian James H. Madison stated in his book, The Indiana Way, ““Never had the state seen such a broad, concerted, systematic effort to effect change, to move Indiana rapidly from its pioneer condition of isolation.” (p. 83).
The ambition was great. Armed with funds from bond purchases, work started throughout the state on the various projects.
And then, almost as quickly, it stopped. The funds had run out.
None of the canals were completed - only nine miles of the Central Canal in Indianapolis were built. The other two saw a bit more - 90 miles of the Wabash & Erie and 30 of the Whitewater.
Madison noted the immediate cause was the Panic of 1839, but the state had also bitten off more than it could chew in debt. It had made a big bet, and lost badly. “By 1841,” Madison wrote, “embarrassed officials admitted that Indiana could not pay even the interest on its internal improvements debt, much less the principal.” (Madison, p. 83).
The state was bankrupt.
Within a decade, railroads would surpass canals as the main mode of inland transportation and Indiana, with that strategic location, would become a prime rail center. But those railroads were built largely with private funds by many competing roads, whose rails would criss-cross the state.
So even if the state’s massive investment of taxpayer money had been fully paid for and completed, the canals, the biggest part of the Mammoth Internal Improvements Act of 1836, would have largely been rendered obsolete as soon as they were completed by a newer technology.
There are a few lessons to learn from Indiana’s folly.
One is a lesson in central planning. Indiana’s government thought canals would be a boon to the state. While railroads were beginning to grow and the Mammoth Internal Improvements Act itself called for a state-funded railroad, it still allocated millions for canals. There is a danger in spending tomorrow’s money to fix today’s problems without looking into the future, and a moral hazard in doing so.
Once decision-making is left to the central authority of the state, decisions often get made not for economic efficiency or profit, but to appease different interests. One reason why the Mammoth Internal Improvements Act was so broad was because each part of the state wanted its slice of the pie.
Madison stated in his history of Indiana, “There were intense regional rivalries and jealousies that urged canals for all major areas of the state. State government eventually responded to this pressure.” (p. 82).
From that, it is impossible for central planner cannot have perfect knowledge in the first place, and that knowledge becomes diluted with the need to satisfy many constituencies in the political process.
As F.A. Hayek wrote in his 1945 essay, “The Use of Knowledge in Society,”

If we can agree that the economic problem of society is mainly one of rapid adaptation to changes in the particular circumstances of time and place, it would seem to follow that the ultimate decisions must be left to the people who are familiar with these circumstances, who know directly of the relevant changes and of the resources immediately available to meet them. We cannot expect that this problem will be solved by first communicating all this knowledge to a central board which, after integrating all knowledge, issues its orders. We must solve it by some form of decentralization. But this answers only part of our problem. We need decentralization because only thus can we insure that the knowledge of the particular circumstances of time and place will be promptly used.

After the state defaulted, some of the projects were picked up and completed. The Wabash & Erie Canal was completed with private funds, as was the Whitewater Canal. Neither was profitable, largely due to the expansion of the railroads. At the same time, the proposed railroad between Madison and Indianapolis was completed by private entities in 1847 and was one of the first railroads to be built west of the Appalachian Mountains. Parts of the line remain active today.

Private enterprise - buoyed by the profit motive and local knowledge - accomplished what central planning could not.

The second lesson is for governments to be be wary of going to the debt well. Borrowing a sizeable sum of money might look like a good investment with immediate short-term benefits, but the long-term costs will come back to your taxpayers in the form of interest payments.
Smith warned of governments relying on debt to finance projects.

“The government of such a state is very apt to repose itself upon this ability and willingness of its subjects to lend it their money on extraordinary occasions. It foresees the facility of borrowing, and therefore dispenses itself from the duty of saving,” wrote Adam Smith in Wealth of Nations (Book V, Chapter III). By heeding Adam Smith’s warning - and through its own painful experience - Indiana has found a way of financing projects with taxes already collected, and largely avoiding the lure of debt and planning large projects. It’s a lesson many in power would be wise to heed.


Sources
Fredrich A. Hayek (1945). “The Use of Knowledge in Society  (retrieved from https://www.econlib.org/library/Essays/hykKnw.html)
James H. Madison (1986). “The Indiana Way,: A State History.” Indiana University Press, 360 p.
Adam Smith (1776). “An Inquiry into the Nature and Causes of Wealth of Nations” (retrieved from https://www.econlib.org/library/Smith/smWN.html)