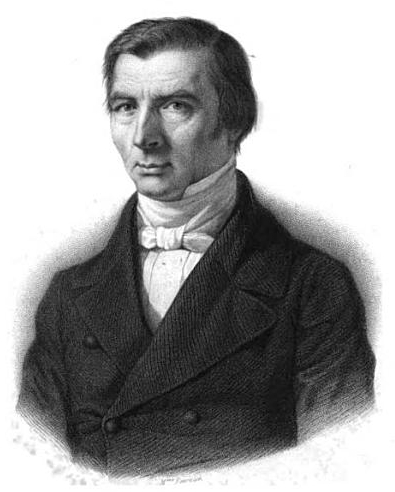 The French economist and free trade activist Frédéric Bastiat (1801-1850) dreams of slashing the size of the French government’s budget by abolishing the standing army and replacing it with local militias:

The Utopian politician: “[Cutting tariffs] have given me something even more precious.”

His adviser: “And what is that, if you please?”

The Utopian politician: “International relationships based on justice, and the likelihood of peace, which is almost a certainty. I would disband the army.”

The Utopian politician: “Except for some specialized divisions, which would recruit voluntarily just like any other profession. And as you can see, conscription would be abolished.” …

His adviser: “In short, you are disarming the country based on a Utopian faith.”

The Utopian politician: “I said that I was disbanding the army and not that I was disarming the country. On the contrary, I intend to give it an invincible force.”

His adviser: “How are you going to sort out this heap of contradictions?”

The Utopian politician: “I will call on the services of all citizens.‘ …

The Utopian becomes excited: “Thank heavens; my budget has been reduced by 200 million! …"

In this economic sophism entitled “The Utopian” (1847) Bastiat dreams of being appointed head of the French government with dictatorial powers to introduce all of his liberal reforms. He lets his head go and comes up with a long list of taxes he would cut and entire government programs he would abolish: cutting taxes on sending letters and the tax on salt; ending the prohibition on importing textiles from Belgium, and cutting tariffs on imported wheat, meat, and wood for fuel; cutting all other tariffs to a maximum of 5%; cutting the city tolls on wine; ending state subsidies to religious groups; and freeing up education. Having slashed government revenue he then turns to drastically cutting government expenditure, beginning with the largest single item in the government budget, i.e. military spending (30%). Bastiat was a very strong opponent of war, colonialism (especially France’s colony in Algeria), conscription, and standing armies. The French army of his day consisted of 400,000 men most of whom were young men conscripted for 7 years when they turned 20 years of age. By immediately abolishing the French standing army he would liberate 400,000 men from conscripted servitude and save French taxpayers some 400 million francs each year. It would be replaced by a system of volunteer, local militias based upon the model of the American militias which he admired very much. In a speech on “Disarmament and Taxes” which he gave at an international Friends of Peace Conference in Paris in August 1849 he made a similar argument, this time with the added twist that high indirect taxes on the poor to pay for the standing army increased poverty and led to outbreaks of revolution like that which occurred in February 1848. He was still making the same argument in the last work he published before he died, the famous essay *What is seen and what is not seen" (July 1850).