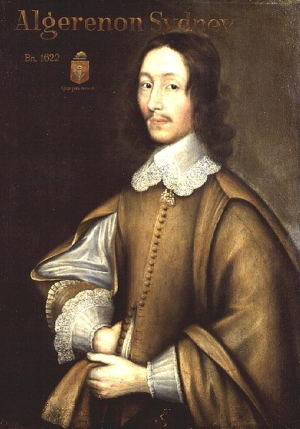 The radical English republican political theorist Algernon Sidney (1622-1683) asks why subjects of the King should obey the law. He concludes that we should obey not because of threats of punishment or coercion but because the law was based upon the “eternal principle of reason and truth”:

… the directive power of the law, which is certain, and grounded upon the inherent good and rectitude that is in it, is that alone which has a power over the conscience, whereas the coercive is merely contingent; and the most just powers commanding the most just things, have so often fallen under the violence of the most unjust men, commanding the most execrable villainies, that if they were therefore to be obeyed, the consciences of men must be regulated by the success of a battle or conspiracy, than which nothing can be affirmed more impious and absurd….

If this were so, the governments of the world might be justly called magna latrocinia; and men laying aside all considerations of reason or justice, ought only to follow those who can inflict the greatest punishments, or give the greatest rewards. But since the reception of such opinions would be the extirpation of all that can be called good, we must look for another rule of our obedience, and shall find that to be the law, which being, as I said before, sanctio recta, must be founded upon that eternal principle of reason and truth, from whence the rule of justice which is sacred and pure ought to be deduced, and not from the depraved will of man, which fluctuating according to the different interests, humors and passions that at several times reign in several nations, one day abrogates what had been enacted the other. The sanction therefore that deserves the name of a law, which derives not its excellency from antiquity, or from the dignity of the legislators, but from an intrinsick equity and justice, ought to be made in pursuance of that universal reason to which all nations at all times owe an equal veneration and obedience.

The republican radical Algernon Sidney (1622-1683) wrote his best known work on the eve of his execution for treason so it is not surprising that there appear to be some autobiographical reflections in some passages such as these ones about “the depraved will of man, which fluctuat(es) according to the different interests, humors and passions that at several times reign in several nations” as it was during in the Restoration of the Stuart Monarchy which he strenuously opposed, and in this one “If he has therefore a coercive power over me, ’tis through my weakness; for he that will suffer himself to be compell’d, knows not how to die.” Of course, Sidney refused to be compelled and was willing to die for his beliefs. He wrote the Discourses between 1681 and 1683 (the year of his death) in opposition to Filmer’s defense of the divine right of monarchs which appeared in 1680. The main grounds for Filmer’s belief that we should obey the king were the following: the historical tradition which lay behind the crown, the authority given to him and his family by god, and the fact that the King and his supporters had the weapons to enforce their decisions. Sidney rejected all three grounds as illegitimate and wrong, being “merely contingent” things, and boldly asserted that “that which is not just, is not Law; and that which is not Law, ought not to be obeyed” since this was based upon “inherent good and rectitude.” It is not therefore surprising that Sidney’s book was a favourite among the American revolutionaries like Thomas Jefferson who had a copy in his library.