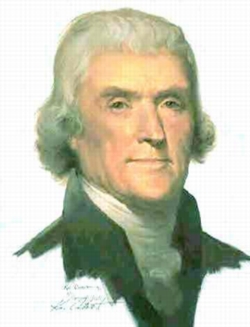 Jefferson writes from Paris to Edward Carrington, whom Jefferson sent as a delegate to the Continental Congress from 1786 to 1788, on the importance of a free press to keep government in check. He concludes that if he had to choose between “a government without newspapers or newspapers without a government, I should not hesitate a moment to prefer the latter”:

The people are the only censors of their governors: and even their errors will tend to keep these to the true principles of their institution. To punish these errors too severely would be to suppress the only safeguard of the public liberty. The way to prevent these irregular interpositions of the people is to give them full information of their affairs thro’ the channel of the public papers, & to contrive that those papers should penetrate the whole mass of the people. The basis of our governments being the opinion of the people, the very first object should be to keep that right; and were it left to me to decide whether we should have a government without newspapers or newspapers without a government, I should not hesitate a moment to prefer the latter. But I should mean that every man should receive those papers & be capable of reading them.

Jefferson constantly surprises the reader with his radical insights into the nature of government and his remedies to correct its abuses. In this letter written from Paris while he was Minister to France to Edward Carrington, whom he had appointed to represent the state of Virginia at the Continental Congress he makes two such insights: the first is the topic of the quotation, namely that he thinks the role of a free press in keeping government power in check is so important that he would prefer “newspapers without government” to “government without newspapers; the second is his statement about the nature of European governments (remember he is writing on the eve of the outbreak of the French Revolution in 1789), that they have divided the nation into two contending classes where the government were like wolves who devoured the wealth of the people, who were like sheep. Jefferson warns Carrington that all governments, even the new American government of which they themselves were members, unless checked by a knowledgeable citizenry, would inevitably become wolves.