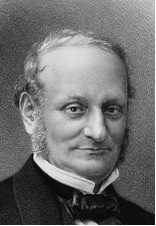 One of the many articles translated from the French which appeared in Lalor’s Cyclopedia in 1884. This one from Louis Wolowski and Pierre Émile Levasseur is a spirited defense of the natural right to property:

Property, made manifest by labor, participates in the rights of the person whose emanation it is; like him, it is inviolable so long as it does not extend so far as to come into collision with another right; like him, it is individual, because it has its origin in the independence of the individual, and because, when several persons have co-operated in its formation, the latest possessor has purchased with a value, the fruit of his personal labor, the work of all the fellow-laborers who have preceded him; this is what is usually the case with manufactured articles. When property has passed, by sale or by inheritance, from one hand to another, its conditions have not changed; it is still the fruit of human liberty manifested by labor, and the holder has the same rights as the producer who took possession of it by right.

Lalor’s massive encyclopedia was aimed squarely at the American market but included dozens of translations from the French language Dictionnaire de l’économie politique published in 1852. The full French original has unfortunately never been translated into English even though it contains a huge number of important essays written by Bastiat and other luminaries of French political economy in the mid-19th century. This quotation comes from one of the more interesting entries on property.