The 5th Day of Christmas: Samuel Cooper on the Articles of Confederation and peace on earth (1780) 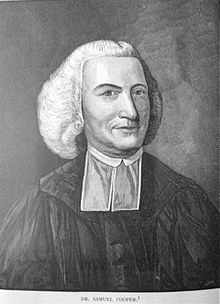 The Massachusetts clergyman Samuel Cooper (1725-1783) gave a patriotic sermon in 1780 to celebrate the adoption of the Articles of Confederation. He concludes by urging his listeners to help build “the new city” in America by making the wilderness fruitful, inviting the injured and oppressed to come to America, and to create a country which “breaths” the principles of “peace on earth, and good will towards men”:

Our mountains, our rivers and lakes have a singular air of dignity and grandeur. May our conduct correspond to the face of our country! At present an immense part of it lies as nature hath left it, and human labour and art have done but little, and brightened only some small specks of a continent that can afford ample means of subsistence to many, many millions of the human race. It remains with us and our posterity, to “make the wilderness become a fruitful field, and the desert blossom as the rose”; to establish the honour and happiness of this new world, as far as it may be justly our own, and to invite the injured and oppressed, the worthy and the good to these shores, by the most liberal governments, by wise political institutions, by cultivating the confidence and friendship of other nations, and by a sacred attention to that gospel that breaths “peace on earth, and good will towards men.” Thus will our country resemble the new city which St. John saw “coming down from God out of heaven, adorned as a bride for her husband.” Is there a benevolent spirit on earth, or on high, whom such a prospect would not delight?

Cooper’s very long patriotic sermon was regarded as a model of its kind when it appeared in 1780 and was translated into other languages and circulated widely. He extolls the sacrifices made by patriots during the revolutionary war and upholds a vision of what America might become. He invokes the vision of America as the new “holy city, the new Jerusalem” spoken about by John in the Book of Revelation where the city comes “down from God out of heaven, prepared as a bride adorned for her husband” (Rev. 21:14). Cooper hopes that the Americans will be able to live up to the promise of their new country. This they can do if they follow a number of conditions which he sets out: that they believe in their ability to transform the new world into a fruitful and productive land, that they do so by the “human labour and art” of the both the existing settlers as well as by millions of “the injured and oppressed, the worthy and the good” who will come to its shores, that they preserve their liberal government and institutions, that they establish friendly relations with other countries, and that they devote “sacred attention” to creating a country which “breaths” the principles of “peace on earth, and good will towards men”. One should also note an important proviso mentioned by Cooper, namely that “to establish the honour and happiness of this new world” the Americans could only make use of the land and its resources “as far as it may be justly our own.”