The 3rd Day of Christmas: Erasmus stands against war and for peace on earth (16th century) 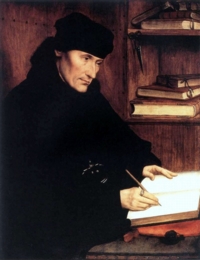 Found in The Works of Vicesimus Knox, vol. 5

In his polemic against war, the Dutch humanist scholar and theologian Desiderius Erasmus (1466-1536) denounces war for its destructiveness and its violation of fundamental Christian doctrine. He reminds Christians that at the birth of Christ “the angels sung not the glories of war, nor a song of triumph, but a hymn of peace”:

If there is in the affairs of mortal men any one thing which it is proper uniformly to explode; which it is incumbent on every man, by every lawful means, to avoid, to deprecate, to oppose, that one thing is doubtless war. There is nothing more unnaturally wicked, more productive of misery, more extensively destructive, more obstinate in mischief, more unworthy of man as formed by nature, much more of man professing Christianity….

Solomon was a type of Christ. But the word Solomon in Hebrew signifies the Pacific. Solomon, on this account, because he was pacific, was chosen to build the temple. David, though endeared by some virtues, was rejected as a builder of the temple, because he had stained his hands in blood, because he was a sanguinary prince, because, in a word, he was a warrior. He was rejected for this, though the wars he carried on were against the wicked, and at the command of God; and though he, who afterwards abrogated, in great measure, the laws of Moses, had not yet taught mankind that they ought to love their enemies.

At the nativity of Jesus Christ, the angels sung not the glories of war, nor a song of triumph, but a hymn of peace. “Glory to God in the highest; on earth peace; good-will towards men.” The mystic poet and prophet foretold before his birth, Factus est in pace locus ejus.” (And his place is in peace)

In three major works Erasmus presents a devastating critique of war, especially when waged by Christians. There is the standard denunciation of the impact war has has on ordinary working people, “the poor, the unoffending common people”, whose lives and property are destroyed by the armies led by aristocrats, mercenaries and even bishops of the church. To Erasmus, all war was a form of fratricide with fellow humans killing each other, but it was doubly fratricidal when fellow Christians killed each other, or what he called “this fit of insanity”. When Christian killed Christian he believed this violated Christ’s “own peculiar law”, the law of love or charity. Even when a military leader like King David fought wars “against the wicked, and at the command of God” he ended up with blood on his hands and was thus “a sanguinary prince” and therefore not invited to build God’s temple. He reminds his readers that at the birth of Christ “the angels sung not the glories of war, nor a song of triumph, but a hymn of peace.” In the Europe of his own day the people were “satiated with everlasting wars” and it was now time to “indulge at length a longing after peace.”