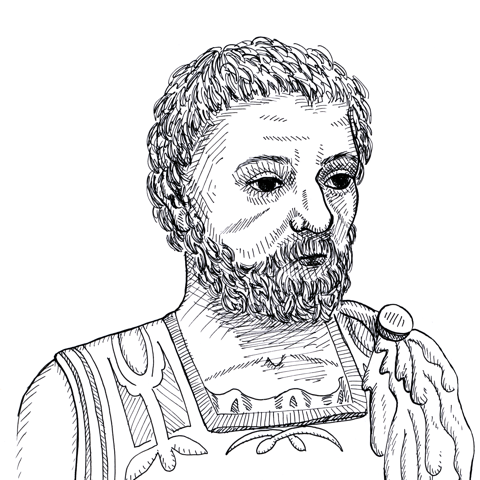 Found in The Meditations of the Emperor Marcus Aurelius Antoninus (2008)

The Emperor Marcus Aurelius Antoninus (121-180) was also a Stoic philosopher whose Meditations (written while on a military campaign during the 170s) were highly influential during the Scottish Enlightenment. He exhorted each person to find peace within themselves by discovering the natural laws which governed the universe and living one’s life in accordance with them. His advice was to live one’s life “always straight and right, and not as amended or rectified” by others:

It is extraordinary to think that Marcus Aurelius wrote these meditations while he was planning to fight or actually waging war near the Danube river. They are deep reflections on human nature, the natural laws which govern the world, the dangers of being swept away by one’s passions or emotions, and the need to live one’s one life in a self-critical and calm manner under the guidance of reason. These are not the kind of thoughts one usually associates with military leaders in the heat of battle. However, Marcus Aurelius does hint at the passions which might have been flooding his mind at this time when he warns against the dangers of the “animal soul” overwhelming “the intellectual” soul. Without the distance and calm which he believed reason provides us men can “be moved, like puppets, by appetites and passions, (which) is common to us with the wild beasts.” The Scottish enlightened thinker Francis Hutcheson (1694-1746) was drawn to the Meditations which he helped translate from the Greek in 1742, thus making this book one of the more influential texts of the Scottish Enlightenment.