Leonard Read on Ludwig von Mises as the economic dictator of the U.S. (1971) 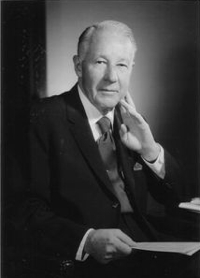 Found in Toward Liberty: Essays in Honor of Ludwig von Mises, vol. 2

Leonard Read (1898-1983) relates a story about Ludwig von Mises who was asked what he would do if he were made dictator of the U.S. His immediate answer was that he would abdicate so as to unleash as much creative activity by individuals as possible:

The final question was posed at midnight: “Professor Mises, I agree with you that we are headed for troublous times. Now, let us suppose you were the dictator of these United States. What would you do?”

Quick as a flash came the reply, “I would abdicate!” Here we have the renunciation side of wisdom: man knowing he should not lord it over his fellows and rejecting even the thought.

Few among us are wise enough to know how little we know. Ignorance of limitations is to be expected from every one who does not see beyond himself. The wise man, on the other hand, achieves a measure of self-transcendence: he sees beyond himself, even beyond his environment. Knowing far more than the mill run of us, he measures his knowledge against what might be known and confesses to knowing nearly nothing. Such a rare individual weighs his finite knowledge on the scale of infinite truth, and his awareness of his limitations tells him never to lord it over others. Such a person would renounce any position of authoritarian rulership he might be proffered or, if accidentally finding himself in such a position, he would abdicate—forthwith!

This anecdote dates from 1942 or 1943 soon after Mises came to America from Europe. He was having dinner with Leonard Read and a few other defenders of the free market when one of them asked him late at night as the evening was coming to a close what he would do if here made dictator of the U.S. Having just come from Europe which was dotted with dictators like Hitler and Stalin he knew what he was talking about. His immediate answer was to say “I would abdicate!” The reasons why he would do this are interesting because at first glance it might seem that a dictator like him could in fact do some good before he was carted off by the police for interfering with the war effort. Couldn’t he issue decree after decree deregulating the economy, pardoning black marketeers from jail, using his office to broadcast fireside chats on the radio about the benefits of the free market, and so on. Perhaps he realised though that given the state of thinking in the country at that time about the need for and justice of economic regulations that anything he did in office would be a waste of time. Mises realised that one would have to win the battle of ideas first before one could put long-lasting economic reform into practice. Another thought must have been that the political power of the vested interests who benefitted from government regulations, contracts, and subsidies were so great that they could wage a very potent counter attack to any reforms he might introduce while dictator. However, there is also the moral argument that must have gone through his mind, that being a dictator of any kind was in itself a violation of other people’s rights. Thus, Mises not only would abdicate from high political office, but he abdicated from the very idea of rulership of one person over another. This story about Mises should be read alongside a similar story Frédéric Bastiat wrote 100 years earlier in 1847, “The Utopian”. Bastiat imagines himself to be the economic dictator of France and outlines all the radical reforms he plans to introduce before stepping back as he realises that the French people did not share his views about the free market and would never go along with him. So he immediately resigned.