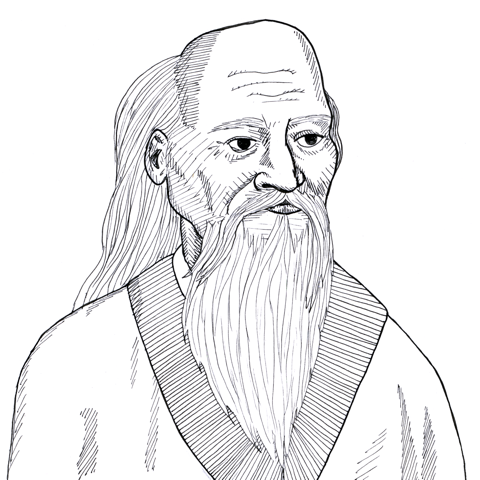 Found in The Texts of Taoism, Part I

The founder of the Taoist tradition of thought, Lao Tzu (600 BC), compares the actions of a petty thief who steals a satchel with those of the great thieves who steal entire kingdoms following the advice of their intellectual advisors, or “sages”:

Here is one who steals a hook (for his girdle);—he is put to death for it: here is another who steals a state;—he becomes its prince. But it is at the gates of the princes that we find benevolence and righteousness (most strongly) professed;—is not this stealing benevolence and righteousness, sageness and wisdom? Thus they hasten to become great robbers, carry off princedoms, and steal benevolence and righteousness, with all the gains springing from the use of pecks and bushels, weights and steelyards, tallies and seals:—even the rewards of carriages and coronets have no power to influence (to a different course), and the terrors of the axe have no power to restrain in such cases. The giving of so great gain to robbers (like) Kih, and making it impossible to restrain them;—this is the error committed by the sages.

The role of intellectuals (or “advisors” or ‘sages") in the creation and maintenance of state power is a considerable one as Lao Tzu notes. It was also a common notion that there is a fine line which separates what a petty thief does from what a “great thief” does. Saint Augustine makes a similar point about pirates in an amusing confrontation between the emperor Alexander the Great and a captive petty pirate. The latter says that “scale” alone is what separates the two.